The Senator who was remanded after the disappearance of Abdulrasheed Maina has been restricted from seeing other govt officials while in custody. 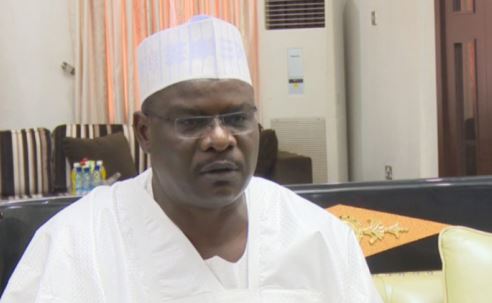 Kuje Correctional Centre in Abuja on Tuesday November 24,  restricted access to Senator Ali Ndume (APC, Borno South), who was kept in custody  for not being able to produce Abdulrasheed Maina, the former chairman of the Presidential Pension Reform Task Team,  whom he stood as surety for in his ongoing N2bn pension funds fraud trial.

Abang had ordered that Ndume be held in the facility pending the sale of his N500m bail guaranty property.

Daily Trust reported that some serving and former lawmakers were at the prison to see Ndume on Tuesday, alongside two serving senators. The publication reported that Senator Ishaku Elisha Abbo (PDP, Adamawa) was heard telling Senator Bala Ibn Na’Allah (APC, Kebbi) at the vicinity of the prison that the officials of the correctional centre required approval of their controller to allow access to Ndume.

While Abbo left without seeing Ndume, Senator Na’Allah was allowed into the facility. He was seen entering the office of the officer in charge of the prison, G. U. Ochepa, after he was subjected to all COVID-19 safety protocols.

Ochepa was heard telling the lawmaker;

“There is a temporary suspension of visit to the facility because of COVID-19. It is not a punishment to the lawmaker. Only lawyers and his wives are supposed to be allowed to see him.”

Na’Allah left Ochepa's office after spending about 20 minutes there. He expressed shock over Ndume’s remand.

“In all my years of practice, as a lawyer this is the first time I’m seeing this kind of situation. What I know is that if the surety is unable to produce the suspect, the person will forfeit the bail bond.

“The bail bond is a very clear court document and there is nowhere it suggest even by implication that you can substitute a surety for accused person."
By makarella - November 25, 2020