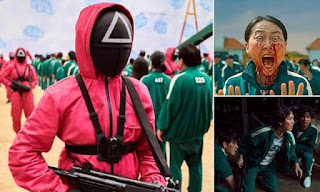 An English council has urged parents not to allow their children to watch the hit Netflix show Squid Game due to its graphic nature and the amount of violent content.

Central Bedfordshire council’s education safeguarding team sent an email to parents and guardians in the authority area advising them to ‘be vigilant after hearing reports that children and young people are copying games and violence’ from the show.

Reports have said children as young as six are copying the show’s traditional children’s games in the school playground which, in the show, come with deadly consequences for the losers.

The South Korean series centres around a fictional game show in which poverty-stricken characters compete in a series of death games to win a £27million cash prize.

The council is the latest in a string of schools to issue advice to parents about the show.The Central Bedfordshire council email, which was first reported in The Guardian, said: ‘There have been some concerning reports recently about children and young people ‘playing’ Squid Game whilst at school.

‘We strongly advise that children should not watch Squid Game. The show is quite graphic with a lot of violent content.’

The survival drama, which features gruesome scenes of characters being shot in the head and organ harvesting, sees contestants take part in versions of traditional children’s games, with the winners progressing to the next stage.

Those failing the tasks are executed by a masked death squad standing by with machine guns.

Schools are similarly warning parents not to let their children watch the horror series after pupils were caught copying scenes in the new show.

Gareth Nichols, from Sir Francis Hill primary in Lincoln, said ‘a small group of pupils within school, aged around six’ were discussing the show and ‘re-enacting some scenes’.

Sandown School in Deal, Kent, said Key Stage 2 teachers had given their pupils extra lessons on online safety and the dangers of watching content that is ‘not age appropriate’ as a response to the show’s popularity.

A spokeswoman for the school said: ‘We are always updating our advice to the parents and children, it’s something we are constantly updating.

‘As a response to this show and others we have put on extra lessons about violence and online harms.’