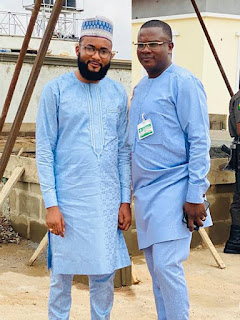 The Chief Executive of Moahz Group of Companies and Moahz Oil & Gas Limited, Engineer Abdulqadir Ojo has lauded Asiwaju Rotimi Ajanaku, a Chieftain of the All Progressives Congress (APC) party in Oyo State for his various efforts and commitment towards securing better future for Nigerian teeming youths.

Ojo said Ajanaku’s persistent and growing investments into the lives of the youths would discourage them from any act of criminality and other social vices.

“I write to rejoice with an exceptional politician of unmatched qualities, a liberal minded leader in Nigeria who has just recorded another feat, I congratulate Asiwaju Rotimi Ajanaku for establishing a radio broadcasting station, Dux FM 94.7. He’s a man known to me for many years, he’s my mentor and a brother so I can talk much about his qualities, businesses and political life.

“I want to recognize you for what you mean to us in Yorubaland, for being a great leader of O’odua Youths and your various efforts to get our teeming youths out of joblessness and poverty level, especially at these difficult times. And I also hope you realize that your contributions to socioeconomic development of Nigeria have earned the praise and respect of all in O’odua States, especially the masses.

“Sir, you deserved more than just a letter of commendation or congratulation, but to be celebrated in an uncommon way to serve as an encouragement to us coming behind and correct leaders who are lacking in lifting or helping others to grow. Besides, hard work also deserves to be recognized. Thank you for your commitment and dedication to the project, Nigeria. We are lucky to have you as an indigene of Yorubaland, and we would always be proud of you,” Ojo euloged.

“Ajanaku is one of those who make things happen, no matter how difficult it looks, his philosophy is focused on no retreat no surrender. He is a great mentor, he lifts people, he makes people, he is a destiny helper and feeds hundreds of people daily. He’s a great philanthropist and exceptional politician, who believes in politics without bitterness.

“No obstacles, no problem, not even a man can stop Asiwaju Ajanaku from staking his life for whatever he believes in. So, I’m not surprised he succeeded in establishing Dux FM 94.7 radio station He has strong determination to transform and reshape Nigeria, especially Southwest politically and economically to his desires. As an entreprenuer, he has founded several multi-million naira companies.

Engineer Ojo however, advised staff of Dux FM 94.7 Station, 66 Journalist Estate, Arepo, Lagos-Ibadan Expressway, Ogun-State to protect the interest of the owner and allow Ajanaku’s vision and ideology be their guide.

“So if this station will grow into enviable level to become role model for others, the staff must emulate the founder’s ideology and allow his characters to be the roadmap and guide for the station. Make the station a home for the professionals, who would be highly creative, knowledgeable, attentive, organized and efficient,” Ojo advised.

Ojo also used the opportunity to pass message to Nigerian youths, “my candid advise to Nigerian Youths is to emulate Asiwaju Ajanaku who prefers rather run the risk of wearing out than rusting out, the later would make one wallop in abject poverty. Set your goals high, and don’t stop till you get there. give 100 percent all of the time, somehow things will work out in the end,” Ojo concluded.