Nigerian Man, Two Others Arrested In India While Installing Skimmers And Pinhole Cameras At ATM Kiosks

The police recovered from him six cloned ATM cards, two skimmers, several micro chips and other electronic gadgets used to execute the crime. 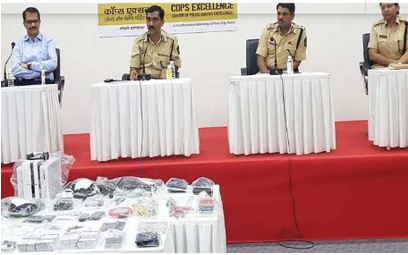 According to the Time of India, a Nigerian man has been arrested by the Indian police.

The Pune Cybercrime police arrested the 31-year-old Nigerian national and two Indians on the charge of installing skimmers and pinhole cameras at various ATM kiosks.

Pune Police Commissioner, Amitabh Gupta who disclosed this on Thursday evening, December 10, said the Nigerian national identified as Lucas William, a resident of Handewadi in Hadapsar, was arrested on Wednesday, while he was installing a skimmer and pinhole camera at an ATM unit.

The police recovered from him six cloned ATM cards, two skimmers, several micro chips and other electronic gadgets used to execute the crime.

The Commissioner also said William was staying illegally in India for the past six years.

The police team also got to know that data of some cards were stolen and cash withdrawn with cloned cards in Nashik in the last week of November. A police team was sent to Nashik to keep a track of any transaction involving cloned cards. The police arrested Bhoraniya and Chhatriwala on December 6 evening.

"Chhatriwala and his gang members, including Bhoraniya, had installed skimmers and pinhole cameras at several ATM units in Mumbai, Thane (Kalwa and Mumbra), Hyderabad, Himachal Pradesh and Gujarat. Chhatriwala was arrested by the Kalwa police in 2017. But after securing bail, he first went to Nepal and then to Dubai. He stayed in Dubai for two years. But after returning to India, he again started the illegal activity.” Gupta added.

On being questioned, the duo revealed they had installed skimmers and cameras at five ATM kiosks in the city in November.

“There are possibilities that Chhatriwala and Bhoraniya might have had installed skimmers and cameras at more ATM units in the city,” said Ashok Morale, additional commissioner of police (crime).

Joint commissioner of police Ravindra Shishve said that all the incidents occurred at the unmanned ATM kiosks.

"There is a need of awareness among the bank authorities. We will conduct meetings with them and tell them to beef up security at the ATM kiosks to avert such incidents. We will also tell them to paste awareness stickers or posters in the kiosks for the people to check if any extended equipment has been attached to the units.” said Shishve.