More than $300,000 raised as reward for anyone with information about Nashville explosion 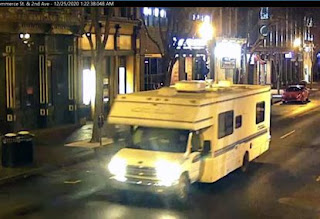 More than $300,000 has been raised to offer as a reward for anyone with information leading to the arrest of the person behind a massive explosion  that rocked Nashville city in the United States on Christmas morning.

The City of Nashville was rocked around 6:30 a.m. on Friday, Christmas morning by an exploding RV car. Three people were hospitalized and two responding officers were also injured in the blast. Police authorities have since said they believe the explosion was intentional.

After the bomb blast on Friday, The Nashville Convention & Visitors Corp. put up a $10,000 reward for useful tips about the bomb blast before increasing their offer later in the evening to $35,000, the Tennessean reported.

“Like everyone, we woke up this Christmas morning to the horrible news of the explosion on Second Avenue. Our hearts, thoughts and prayers are with all involved or affected,” Butch Spyridon, the group’s president and CEO, said in a statement.

“This is when we show the world who we are. Thank you all for everything you do for our city, and stay safe. I believe in Nashville.”

The owners of Lewis Country Store also pledged $20,000 towards any source of information, before Fox Sports host Clay Travis added an additional $10,000 for anyone who could provide information that results in the arrest of a suspect.

On Friday afternoon, “The Profit” host Marcus Lemonis announced on Twitter he would add $250,000 to the reward, bringing the total sum to over $300,000.

“We can’t have our streets terrorized like this,” the television personality wrote.

Lemonis added: “This is when you who are reading this needs to use your social media for what matters most. Protect people.”