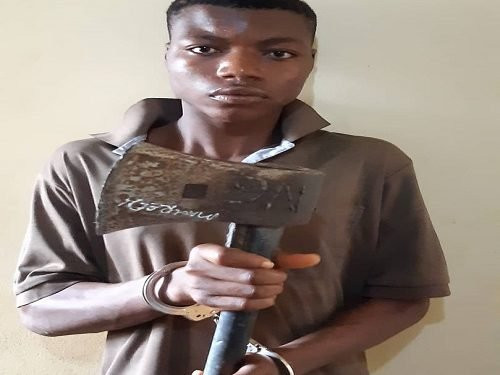 The police in Anambra have arrested 20-year old Uchechi Eze pictured above for allegedly beheading his 4-year old nephew, Chiemere Ezekiel, with an axe in Ugamma village, Obosi in Idemili South Local Government Area of the state.

Spokesperson of the state police command, Hariuna Mohammed, who confirmed the incident to newsmen, said Eze after beheading the little boy, fled the scene and went into hiding. He was later arrested in his hide out where he was seen smoking a substance suspected to be Indian hemp.

“It would be recalled that on the 16/3/2020 at about 10pm, one Uchechi Eze ‘m’ aged 20 years of Ezza LGA of Ebonyi State but reside at Ugamma Village, Obosi used Axe and allegedly beheaded his nephew one Chiemere Ezekiel ‘m’ aged 4 years of Ugamma Village, Obosi in Idemili South LGA of Anambra State.
Victim died on the spot and suspect escaped to unknown destination.  Police operatives attached to Obosi Division visited the scene and took the victim to Unity hospital Obosi where he was confirmed dead by a medical doctor and his Corpse deposited at St. Edward mortuary for autopsy while intensive manhunt of suspect intensified.
Following intelligence report, Police detectives attached to Obosi division in conjunction with Vigilante group in the area arrested the culprit at a criminal hideout smoking substance suspected to be Cannabis Sativa.
Suspect voluntarily confessed to the crime and the exhibit he used in perpetrating the dastardly act was also recovered in his possession.”