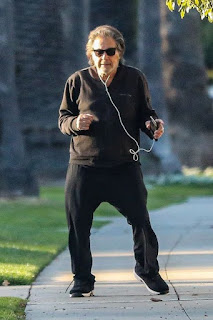 This is the image of a man who is tethered by nothing more than the wires coming out of his ears and into his phone. 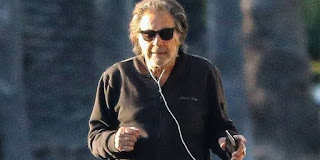 81 and thriving, is the real-life example of the man I want to be.
I saw photos online of the actor dressed in a black sweatsuit, getting his groove on while moseying down the street in his Beverly Hills neighborhood. He had a kick in his step and a song in his heart. Big sunglasses. Wired headphones. Not a fuck to give to anyone. He looks resplendent, and seemingly unbothered by any- and everything going on around him.
While the rest of us conjure up assumptions about what it's like to be "free," Pacino is out here tackling this day one samba step at a time. This is the image of a man who is tethered by nothing more than the wires coming out of his ears and into his phone.
Of course, we have no idea why Pacino is dancing, exactly. Honestly, I don't want to know! That's half the allure. After a career of iconic dance scenes (Scent of a Woman, Cruising), this is a man, jiving on his own terms.
And isn't that the goal? To take that phrase from that one wooden plaque in your mom's bathroom—Dance like no one is watching—and apply it to real life circumstances? Maybe he's vibing to a bit of Rosemary Clooney?
By makarella - February 17, 2022