The lawyer said Kanu, guided by the law of self-preservation, did the right thing by moving away from the environment where attacks were directed at him. 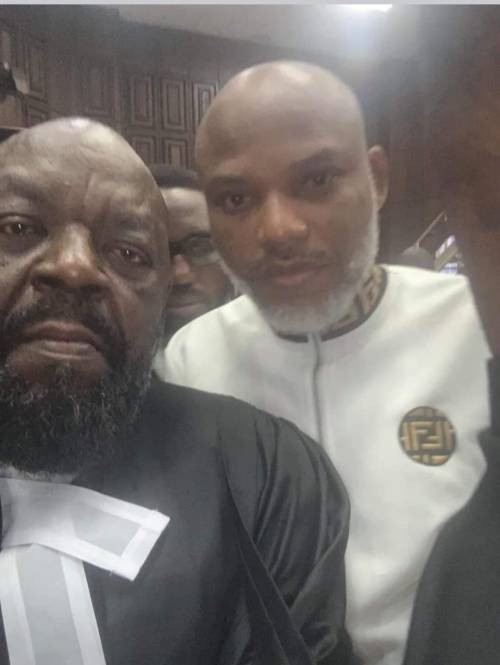 The leader of the Indigenous People of Biafra (IPOB), Nnamdi Kanu's special counsel, Aloy Ejimakor, has said the separatist agitator did not jump bail in 2017 as claimed by the Nigerian government.

The lawyer said Kanu, guided by the law of self-preservation, did the right thing by moving away from the environment where attacks were directed at him.

Ejimakor said this in a video was obtained by SaharaReporters on Wednesday.

The legal practitioner said a military attack on Kanu's residence in Abia state was launched by the Nigerian government to kill him.

He also berated President Muhammadu Buhari's government for pursuing the pro-Biafra secessionist leader to Kenya and bringing him to Nigeria.

Ejimakor said, "Good morning, members of the media. My name is Aloy Ejimakor.

"As the lead counsel informed you earlier, I’m the special counsel to Mazi Nnamdi Kanu and the Indigenous People of Biafra, and proudly so.

"Well, the issues are clear.

"There has been this, what I believe we can call propaganda or consistent misinformation that back in 2017, Mazi Nnamdi Kanu had jumped bail and therefore he deserves what he got. That’s wrong. He never jumped bail.

"He was on bail and bond - subsisting, extant and valid as of 10th September to 14th September 2017 when the ill-fated military attacks were launched against him, and unjustifiably so. Anybody who really remembers the magnitude of that attack would believe it was directed primarily at the extra-judicial elimination of Mazi Nnamdi Kanu.

"So, on the issue of jumping bail, there is no law that requires you to sit like a log of wood while someone levels lethal attacks on you; and when the attacks came from the complainant itself, that is from the Federal Republic of Nigeria, it makes it worse.

"You already had him under your jurisdiction. He was before a court of competent jurisdiction and he was out on bail. So, what do you expect him to do in the face of those military attacks?

"He was going to, of course, look for ways of fleeing from the attacks considering the fact that he didn’t have any military armaments to repel the attacks or defend himself.

"The next action he would take, as a human being who is guided by the law of self-preservation, was to move away from the locale of the attack, and there is nothing wrong with that; and having not succeeded in extrajudicially killing him in 2017, they now pursued him to Kenya.

"This was hot pursuit. See, these are issues that have to be cleared first before any trial. You pursued him from Isiama Afaruku Ibeku in Abia State to Kenya. And when you got him, instead of giving him his rights under Kenyan law or under international law, you renditioned him in an extraordinary way.

"Extraordinary rendition is inherently a form of torture. It is prohibited within the framework of municipal and international laws; and these international laws, Nigeria is a State party. Nigeria herself has an extradition Act.

"If you rendition somebody from the Federal Republic of Nigeria to a foreign nation, you’ve violated the laws of the Federation of Nigeria and that is why America that has an interest in having Abba Kyari brought to the United States to answer to charges applied to the Nigerian government to approve his extradition."