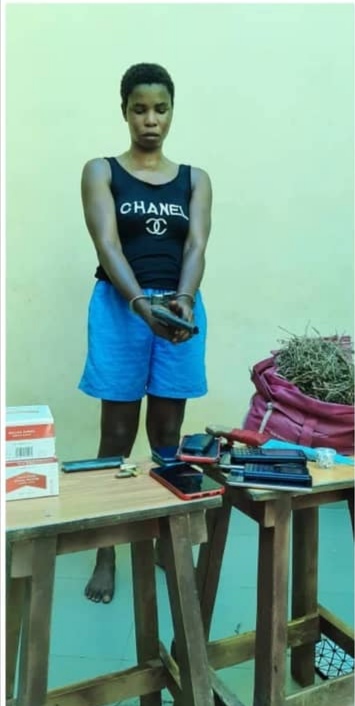 One Blessing Oghule who was found in possession of a fabricated beretta pistol with five rounds of live ammunition and illicit drugs has been arrested.

She was nabbed by operatives from the Delta State Police Command during operations.

This was disclosed by the spokesperson of the Command, DSP Bright Edafe.

He said that the suspect, Oghule, was arrested alongside three other suspects during a raid on black spots at Abraka axis in Asaba.

“On 21/10/21 at about 1415hrs, the Command raider operatives in compliance with the directive of the Commissioner of Police Delta State, CP Ari Muhammed Ali, raided black spots at Abraka axis in Asaba.

During the raid, five suspected stolen phones, a bag containing substances suspected to be cocaine and Indian hemp were recovered from Oghule.

Edafe stated the Commissioner of Police has directed full investigation and possible arrest of other suspects and the matter will be charged before Court after the conclusion of investigation.