The suspect allegedly forced his girlfriend to perform oral s3x on him at knifepoint while recording the act on his phone and later posted the video on his WhatsApp status and Instagram account. 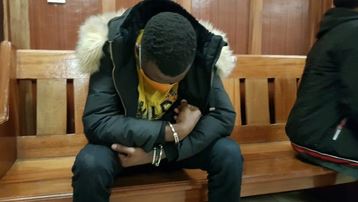 A Nigerian national identified as Joseph Adekunle Odu has been arraigned in a Nairobi court for allegedly forcing his Kenyan girlfriend to perform oral s3x on him and sharing it on his social media accounts.

The accused appeared before Chief Magistrate Francis Andayi at Milimani law courts on Monday, August 16, where he was charged with assault, threatening to kill, cyber harassment, and being in possession of bhang.

According to a police report, Odu requested the complainant, Caroline Wanjiku Wairimu, to meet him in his Ruaka house to settle some domestic issues.

When she arrived, Odu allegedly accused her of sleeping with other men and threatened to kill her with a knife.

He then forced her to perform oral sex on him at knifepoint while recording the act on his phone and later posted the video on his WhatsApp status and Instagram account.

"I woke up in the morning and found a lot of missed calls and messages on my phone from people trying to ask me whether I was ok. I was shocked because I didn’t understand what was going on,” read the statement of the complainant.

Odu is also charged that on August 8, 2021, at Ruaka View Apartment within Kiambu county, without lawful excuse uttered the words ‘I will kill you’ while allegedly threatening to kill the woman.

He is also facing another count of assaulting her at Garissa Heights Apartments in Kileleshwa, and two more counts including Cyber harassment and being in possession of bhang.

The complainant claims she has been dating him for two years and that he has assaulted her on several occasions.

She further claims that around November last year, the accused assaulted her to a point that she almost lost her eyesight because he was jealous of her male friend.

“The scars of continuous assault have left me traumatized,” she added.