The victim was lured to part with her money by the scammer by claiming he had sent her costly ornaments, shortly after getting acquainted. 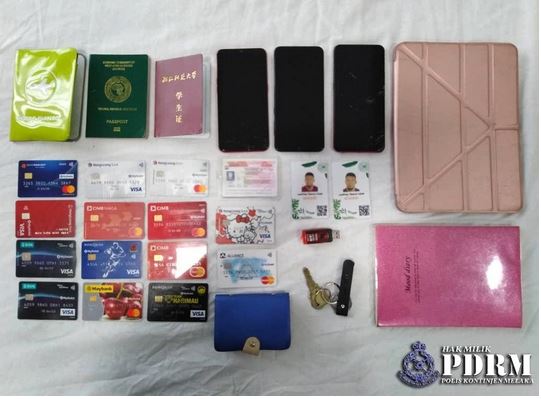 Exhibits recovered from the suspect

State Commercial Crime Investigation Department (CCID) chief Superintendent E Sundra Rajan in a statement on Tuesday, June 15, said the 38-year-old suspect was arrested during a raid at a condominium in Jalan Tun Razak in Kuala Lumpur on Sunday, June 13.

He said the suspect was believed to be involved in Love Scam activities and had used the name Mahmudin Jafaardi on Facebook.

"Investigations found that the suspect is believed to be carrying out the activity along with other criminal associates and efforts to track down the other individuals are underway," he stated.

"The suspect, during interrogation, claimed he was bored sitting at home during the movement control order and decided to cheat others. He had entered the country in March last year under a social visit pass and had overstayed in Malaysia,"

Supt Sundra said police are investigating whether the suspect has been responsible for other similar love scams.

He said police had also confiscated 14 bank cards, electronic gadgets, a Nigerian passport and various other items during the noon raid.

"We are now looking for one of his accomplices," he said, adding that the suspect is under remand to assist in the investigation under the Penal Code for cheating.

Supt Sundra said police started tracking the suspect after the victim, a religious teacher lodged a police report at Alor Gajah on June 9 after she was duped out of RM78,000 by the suspect.

The victim, a single mother, was conned by a man she had befriended on Facebook in early May.

The victim was lured to part with her money by the scammer by claiming he had sent her costly ornaments, shortly after getting acquainted.

She also constantly received romantic messages from the scammer to woo her. 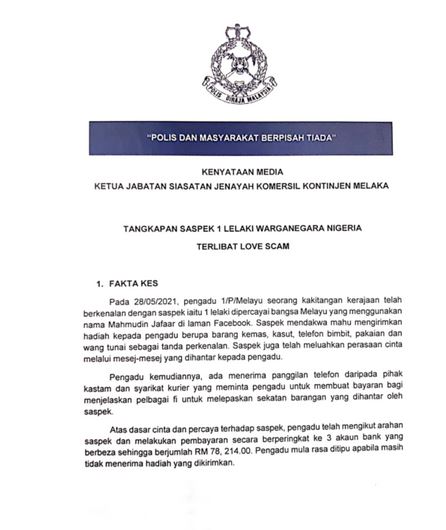 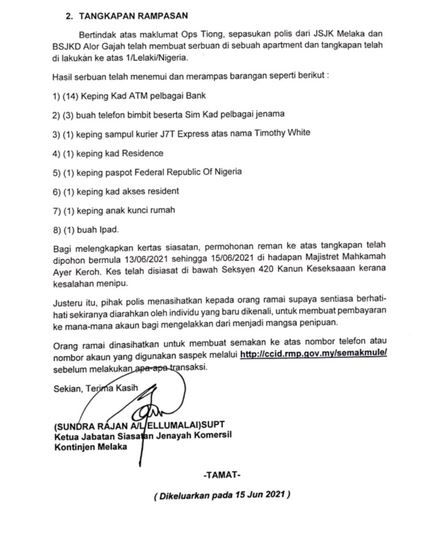