The Akwa-Ibom state-born suspect expressed regrets over her decision to dump the corpse in an isolated place, blaming her decision on wrong counsel by a friend. 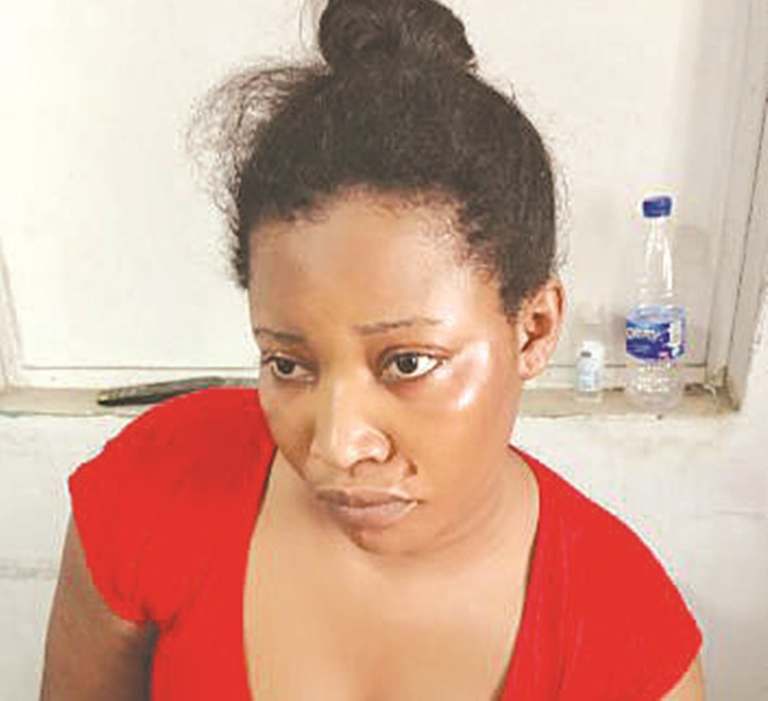 The story has been told of a mother of two kids who allegedly ran over a woman with her car and then proceeded to dump the corpse in a dump site.

She rushed out of her car, after bringing it to an abrupt halt, to behold the horrifying sight of a woman lying on the walkway, motionless. She was alleged to have hit the victim with her car.

There was a commotion as commuters and passers-by rushed to where the victim laid on the floor. Everyone was giving their respective suggestion at the same time, while some were busy taking shots of the victim on the ground, with their mobile phones.

An elderly man later suggested they rush the victim to the hospital, where she could be resuscitated.  Unfortunately, the victim was confirmed dead at an undisclosed hospital.

Crime Guard gathered that doctors at the hospital told the mother of two identified as Mrs Anita Harrison, to take the corpse to the Police station to incident the matter, from where she would be accompanied by policemen to deposit the corpse in the morgue. Rather than heed the advice, the suspect drove to an isolated place after the long bridge on the Lagos/Ibadan expressway and dumped the corpse, close to a dump site and zoomed.

Meanwhile, back at the victim’s home, apprehension had set in, following her absence.

Relatives of the 35-year-old victim, Lafiat Idowu,  reported her disappearance to the Police, who conducted a routine search round hospitals, morgues and other places. In the process, the Police team was said to have visited the hospital where the victim was rushed to and were informed about a case of an auto accident victim that was brought in dead. Surprisingly, one of the nurses brought out a piece of paper where the registration number of the vehicle that brought the victim was scribbled on.

The suspect was traced to her house at 12 Sabena street, Iju Ishaga, through her plate number, at the weekend.

When Vanguard interviewed the Akwa-Ibom state-born suspect, she expressed regrets over her decision to dump the corpse in an isolated place, blaming her decision on wrong counsel by a friend.

According to her: “A friend called me last Thursday, that she wanted to introduce me to a business.

“I went to meet her at Computer Village, Ikeja.  On my way back, I gave her a ride.  On reaching under the Ikeja Bridge,  inward Agege, I didn’t know what happened.

“I didn’t see anyone crossing the road, neither did I see myself ramming into anyone.   I had driven past a woman when I heard people shouting .

“I don’t know if the tyre of the car climbed her or whether the car was close to her. It was the shout of people that made me stop.

“The lady in the car with me accompanied me to the hospital we rushed the victim to.  We were not allowed to bring her out of the car.

“The nurses called a Doctor who checked her and confirmed she was dead. He said she had internal bleeding.  Immediately I heard that,I passed out. By the time I was revived, they told me to take the corpse to the police station. The woman with me advised us to go and drop the lifeless body where the police would discover it and take it to the morgue.

“I drove to the expressway along  Mowe Ibafo. By then, it was dark.  I stopped at a point but could not look at the lifeless body because that was my first time seeing one. The lady with me brought the corpse out of the car and dumped it there.

“I drove home and told my husband who informed the Police.  But to my surprise,  we saw some people who later identified themselves as policemen, in our house.

“I did not hit her with my car. I can’t tell what happened.  I don’t want to go to jail. I have two children. The first is two years and the second is just seven months old. “Unfortunately, the woman that advised me to dump the corpse can’t be reached on phone”.

At this point, she burst into tears.

Explaining how the body was recovered, the Lagos State Police Public Relations Officer, CSP Olumuyiwa Adejobu,  said when the suspect was arrested, she took policemen to where the corpse was dumped, to ascertain whether it was that of the missing woman.

But he said the corpse was not found at the spot it was dumped. An Inquiry from the Sagamu division, according to him, revealed that policemen from the division evacuated the body to the Sagamu General Hospital morgue. On reaching the morgue, he said relatives of the deceased confirmed she was the one.

He added that investigation was still ongoing.