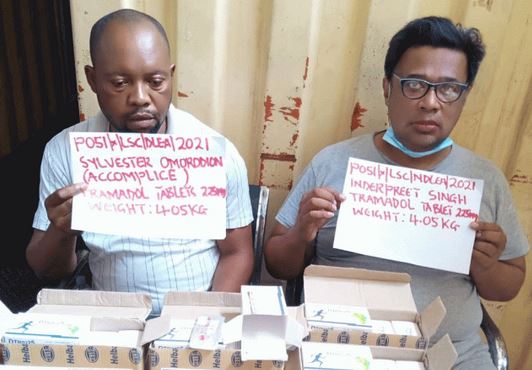 Officials of the National Drug Law Enforcement Agency, NDLEA, has nabbed Samuel Ebenezer, the leader of a syndicate that specializes in importing edibles and other confections (laced with drugs) for the elites in Lagos State.

NDLEA recorded the breakthrough when its operatives raided some drug spots in Agege, Ikorodu, Lekki, Okokomaiko and other parts of the state; dismantled major drug syndicates, arrested suspects and seized large quantities of hard drugs.

According to NDLEA, “One of the drug syndicates burst during the raids is coordinated by one Samuel Ebenezer in Lekki.

“His cartel imports special sophisticated drugs baked in cakes, biscuits and cookies from the United States and sells to the rich and affluent people in Lekki and Lagos Island.”

During the raids, 90 suspects including an Indian were arrested, while over 614 kg of various types of drugs were seized.

According to the Lagos State Commander of the Agency, Mr. Ralph Igwenagu, “the breakdown of the seizures is as follows:

The haul included a container-load of tramadol the agency intercepted at the Apapa seaport.
By ABEE - February 24, 2021