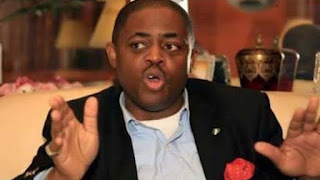 Femi Fani-Kayode has taken a swipe at a critic who called him out over his comment on report of MD of FCMB, Adam Nuru allegedly impregnating a married staff of the bank twice, which in turn led to the death of her husband after he found out.

The former Minister of Aviation had described Nuru as the "scum of the earth who is worse than a leper and ought to be avoided at all costs."

This is the MD of FCMB. His name is Adam Nuru. He sent a good man to an early grave with his heartless and shameful actions. I repeat a good man DIED as a consequence of his reckless, wicked, heartless and irresponsible behavior.

There are no saints in the world & very few angels but to sleep with someone's wife, make her pregnant twice & send him to an early grave is inexplicable & unfathomable. This is made all the worse by the fact that she was working for him in a large corporation where such

Things are not meant to happen between a Managing Director and a subordinate. He also sent over 500 million naira to Ibrahim Magu's Pastor's account "by mistake". The man is filthy, seedy, disgusting, sleazy, irresponsible, dangerous and unreliable.

He deserves far worse than just being sacked from the bank that he presently heads. Far worse! He should not only bow his head in shame but he should also be subjected to total and complete public opprobrium and banned from the company of decent and civilised men.

He is the scum of the earth. He is worse than a leper and ought to be avoided at all costs. May the soul of Tunde Thomas rest in peace and may God judge ALL those that betrayed his love and trust and caused the heartbreak that led to his premature death.

May the soul of Tunde Thomas rest in peace and may God judge ALL those that betrayed his love and trust and caused the heartbreak that led to his premature death. 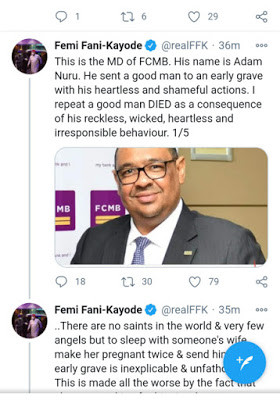 However a follower who reacted to the tweets, accused him of being no better. She added that he is not supposed to comment on the scandalous incident.

Are you better than him??? How is your own family like? You are not suppose to open your mouth on this matter please.

Replying her, Femi Fani-Kayode stated that he never slept with anyone's wife and sent them to an early grave.

I never slept with anyone wife and sentbthem to an early grave you piece of digs sh*t. 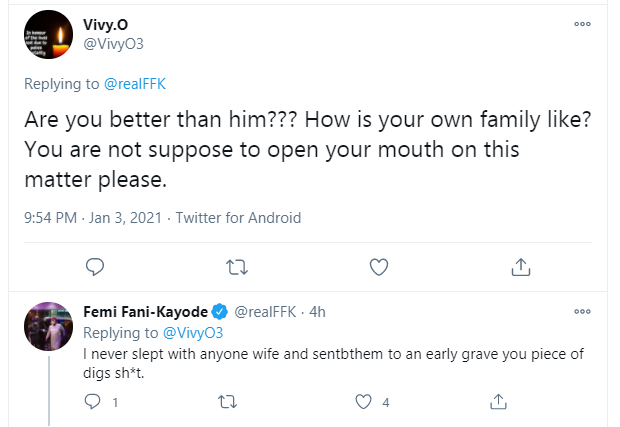