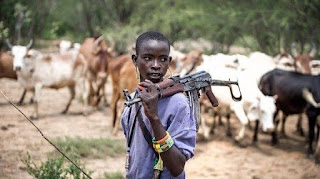 It described the development as unfortunate, adding that such was indicative of the worsening security situation in the country.

The Southern Kaduna People's Union (SOKAPU) on Friday, disclosed that some residents of Gbagyi community in the Chikun Local Government Area of Kaduna State paid over N3 million to Fulani militia to allow them harvest their crops and spend Christmas in their ancestral home without fear of being attacked.

The group, in a statement, said it discovered the situation on Thursday when it took palliatives to at least 1,600 Gbagyi Internally Displaced Persons (IDPs) who had fled surrounding villages taken over by armed Fulani militia.

It described the development as unfortunate, adding that such was indicative of the worsening security situation in the country.

The statement read: "We took drugs, sleeping mats and clothes to these traumatised citizens who Barde visited once and gave N50,000 for their feeding. They told us of the shocking impunity exhibited by the invaders, how they collect huge sums of money to allow the villagers to harvest their crops.

"We also spoke to victims of kidnapping who were ruined economically and more. We spoke to those who lost loved ones and property. We were told that the entire Chikun ward was under the mercy of the armed killers. It is unbelievable that we have a government."

It also said "a certain community paid N3m to the militia to be allowed to stay and spend Christmas”. “We were told that the entire Chikun ward is under the mercy of the armed killers. These people will spend their Christmas in sorrow and pain. No assistance to them is too small," the statement read.