The young lady was shot when some policemen opened fire indiscriminately at Tombia Market in Yenagoa, Bayelsa State. 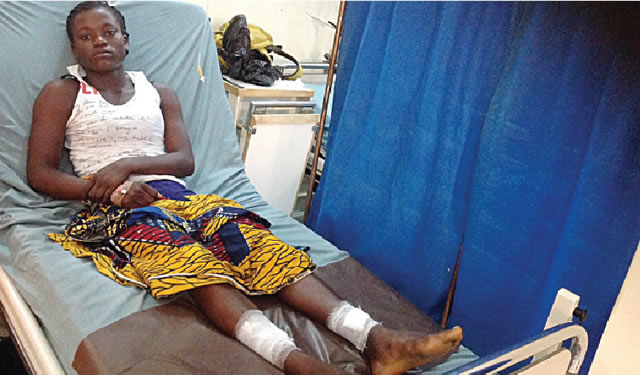 A 17-year-old Nigerian student, Alice Baine has told of how she was shot by policemen.

The young lady was shot when some policemen opened fire indiscriminately at Tombia Market in Yenagoa, Bayelsa State. She shares her experience wuth DANIELS IGONI

Can you introduce yourself?

My name is Alice Baine. I’m 17 years old. I am a student. I’m in SSS 1. I was planning to go back to school but my mother told me to wait until January next year. So, I assisted her to sell around Edepie-Etegwe roundabout market.

What does your mother sell?

My mother sells periwinkles which we process at home and take to the market to hawk.

Can you narrate what happened to you at the market on November 24, 2020?

I went to the market to sell periwinkles. I walked across the bridge to sell on the other side of the market. On my way back, I didn’t know what happened, but all I heard were gunshots. And immediately it felt like something passed through my legs. I felt some shock in me. I had no idea what was going, but at that moment I was already bleeding from my legs. When I looked, I saw a policeman standing and holding a gun. He turned his face away from me and shot again, and people started running. I tried to run also but my legs were heavy and I could not run. So my fellow hawker, a boy, assisted me and took me to the other side of the bridge. It was then that I confirmed that I had been shot on the legs.

People told me to go and tell the policemen that they had shot me, that the bullets they fired had hit my legs. The boy assisted me to go meet the policemen but I didn’t see them again. People who know me in the market took me to a pharmacy not too far from the market. The pharmacist checked the gunshot wounds and told me that he would not be able to treat me. He advised that I should be taken to the hospital. He tied the bleeding points with a towel and I was taken to the hospital in a tricycle. My mother was later informed and she came to meet me.

Have you been visited by the police?

I don’t know about the policemen but I know that the Commissioner of Police came to see us to sort out the bills. But after that visit, I have not seen them here again. As of now, we are the ones feeding ourselves.

How does that make you feel?

I’m very angry now because I lost my brother in an accident that happened the day after the shooting incident. And my family can’t bring money every day to take care of me. I have not seen my mother since then. It’s my aunt and my father that have been coming here to look after me.

What did the Commissioner of Police and his team tell you when they visited?

They asked me questions and brought a statement for me to sign. They wrote down my answers to their questions.

What kind of questions did they ask you?

What will you do when you get well and out of hospital?

If I don’t get proper treatment, I will go to court. Even now, if I have the opportunity I will sue.