In the shocking video, the SARS officers can be seen beating the unarmed Nigerian citizen with a club. 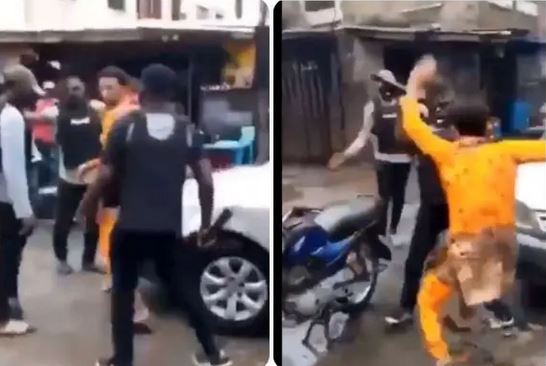 A video has surfaced online showing the moments some officers of the Federal Special Anti-Robbery Squad (FSARS) mercilessly beating up a man in Ebute Metta, Lagos state.

The video come amidst widespread protest against the activities of SARS officers in the country.

In the shocking video, the SARS officers can be seen beating the unarmed Nigerian citizen with a club.

A shocked elderly woman can be heard in the background inquiring as to why the man was being attacked violently.

The spokesman of the police, Frank Mba, disclosed the directive of the IGP in a statement on Sunday, October 4.

The directive was put in place following an outrage over alleged criminal and extra-judicial actions of FSARS officers against citizens in various parts of the country.

In the statement, Mba said the IGP also directed that no officer should embark on a patrol in mufti.

“The inspector-general of police, IGP M.A Adamu, NPM, mni has banned the personnel of the Federal Special Anti-Robbery Squad (FSARS) and other Tactical Squads of the Force including the Special Tactical Squad (STS), Intelligence Response Team (IRT), Anti-Cultism Squad and other Tactical Squads operating at the Federal, Zonal and Command levels, from carrying out routine patrols and other conventional low-risk duties- stop and search duties, checkpoints, mounting of roadblocks, traffic checks, etc with immediate effect,” he said.

“The IGP has warned the Tactical Squads against the invasion of the privacy of citizens particularly through indiscriminate and unauthorized search of mobile phones, laptops and other smart devices.

“They are to concentrate and respond only to cases of armed robbery, kidnapping and other violent crimes when the need arises.”

Watch the video below;

Posted by makarella at 6:06 PM