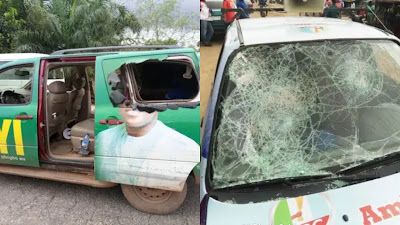 Less than 23 days to the governorship election in Ondo state, political thugs today attacked the convoys of Governor Rotimi Akeredolu and the candidate of the Peoples Democratic Party, Eyitayo Jegede in Oba Akoko in Akoko southwest local government area of the state.

Both candidates were in the town to campaign ahead of the October 10 election in the state.

While Akeredolu said his convoy was attacked by Jegede supporters, the candidate of the PDP insisted that Akeredolu thugs were the attackers.

Olabode described the attack as despicable, sign of desperation by the PDP

The statement said that ” the Akeredolu/Aiyedatiwa Campaign Organisation condemns in strong terms the continued and unprovoked attacks on the All Progressives Congress (APC) by the opposition PDP in Ondo State. 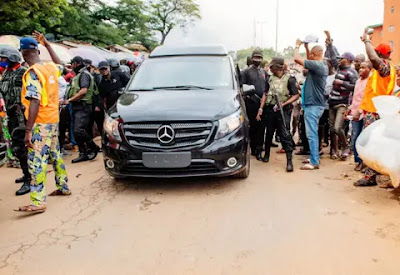 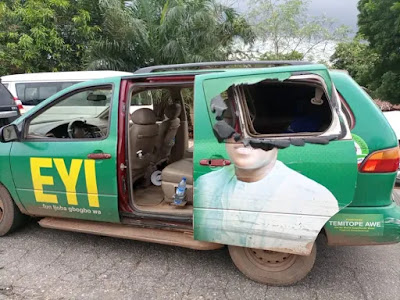 “The Governor, Arakunrin Akeredolu and the campaign train of the APC were on their way to Ikare-Akoko, in continuation of the local government rally

”ln their crass display of madness and thuggery, the hoodlums set ablaze the branded campaign vehicle donated to the Akeredolu/Aiyedatiwa Campaign Organisation by Ambassador Sola Iji.

“The Governor, Arakunrin Akeredolu and the campaign train of the APC were on their way to Ikare-Akoko, in continuation of the local government rally when the thugs struck and attacked the convoy. 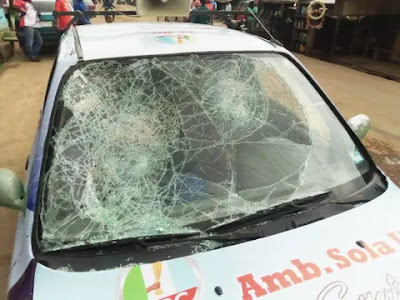 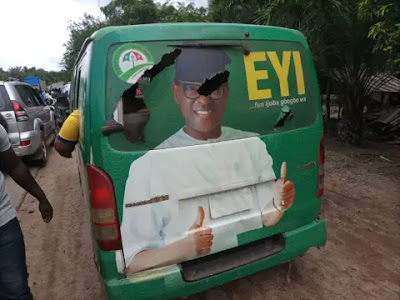 ” ln their crass display of madness and thuggery, the hoodlums set ablaze the branded campaign vehicle donated to the Akeredolu/Aiyedatiwa Campaign Organisation by Ambassador Sola Iji.

” The driver of the vehicle sustained bodily injury and he is now receiving treatment at a government hospital.

“While we are shocked and saddened by this attack, we are not too surprised, because the PDP has shown that it is not focusing on issues in its campaign for the election. They will rather deploy violence and falsehood to score cheap political points.

“We say this is despicable and we view it as a sign of desperation by opposition parties in the state, who can’t stand the popularity of the APC, as they have seen the handwriting of their imminent defeat in the coming election on the wall.

“This unfortunate act is not only condemnable but also deserves serious reprimand. So, we call on security agencies to investigate this latest attack by the PDP against the APC and bring the perpetrators to justice. This must not be swept under the carpet, as it portends grave danger for the smooth conduct of the forthcoming Governorship election in the state.

“While we await the necessary action from the security agencies to bring perpetrators to book, we want to warn those who are bent on fomenting trouble in the state to desist.

“The Akeredolu/Aiyedatiwa Campaign Organisation wishes to assure the numerous APC supporter to remain calm and the resist attempt to join these enemies of Ondo State in perpetrating violence. Victory is certain for the APC! We shall resist them through ballot in a peaceful order.

A statement by the states Publicity Secretary of the PDP, Kennedy Petetei said “The Peoples Democratic Party (PDP) candidate in the forthcoming gubernatorial election in Ondo State, Eyitayo Jegede, was on Wednesday attacked at Oba Akoko, with 10 of his campaign vehicles brutally vandalised.

Jegede was at the palace of Oloba of Oba, Oba Nathaniel Adegoroye, the traditional ruler of the town, where he had gone to pay homage as part of his campaign visits to the town when the attackers descended on his campaign team.

“Some of his supporters sustained varying degree of injuries and have been taken to the near hospital.

“The attackers who were hooded stormed the location after alighting from the convoy of the State Governor, Rotimi Akeredolu who himself was passing by the area at the time.

“Eyewitness said neither Akeredolu nor the police operatives in the governor’s convoy did anything to stop the attackers.

“Everybody was taken by surprise. Aketi people were passing before they stopped abruptly, and before you Jack, these masked men rushed down and started breaking Jegede’s vehicles.

“We had run for safety and by the time we ran, one vehicle was in flame while about 8 others had their windscreens, side glasses and rear-screen smashed,” the eyewitness added.