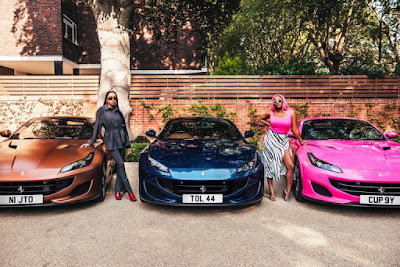 Davido as joined many Nigerians to congratulate the three daughters of businessman and philanthropist, Femi Otedola after they received a new Ferrari Portofino each from the father.

The businessman took his three daughters, Tolani, Temi and Florence (DJ Cuppy) to a car shop in United Kingdom and bought the luxury cars for them.

DJ Cuppy who recently released her first album ‘Original Copy’ had warned her fans on Twitter earlier that she will break the internet with great news.

She went to flood social media with pictures of the cars worth about N300million, in a post that read “Papa took us shopping and bought one of each! #FerrariPortofino #CuppyDat.”

Reacting to the news, Davido congratulated DJ Cuppy and also promised to do the same for his daughters one day.