The shooting of an unarmed black man by a white police officer has forced a reaction from a famous basketballer. 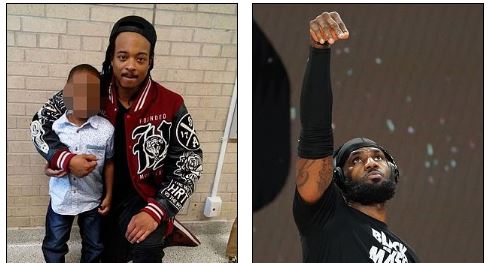 Blake and Lebron James
Famous basketball player, LeBron James has reacted to the shooting of a black man, Jacob Blake by Wisconsin police on Sunday.
The Los Angeles Lakers star said black people are scared living in America..
'I know people get tired of hearing me say it, but we are scared as black people in America,' James said following the Lakers' Game 4 win over the Portland Trail Blazers at the NBA's bubble near Orlando on Monday. 'Black men, black women, black kids - we are terrified.'
Blake was shot seven times by Kenosha, Wisconsin police on Sunday after officers responded to a domestic disturbance call. Video of the incident went viral Monday, showing police shooting the 29-year-old father in the back as he attempted to enter a van.
According his attorney, Ben Crump, Blake's three sons were seated in the van and witnessed the shooting.
Following surgery on Sunday, Blake was listed in serious condition at a Milwaukee hospital on Monday.
'If you're sitting here and telling me that there was no way to subdue that gentleman or detain him or just before the firing of guns, then you're sitting here and lying to not only me, but you're lying to every African American, every black person in the community,' James said. 'Because we see it over and over and over.
'If you watch the video, there were multiple moments where if they wanted to, they could've tackled him. They could've grabbed him. You know? They could've done that. And why, why does it always have to get to a point where we see the guns firing?'
The officers involved are now on administrative leave, according to Kenosha Mayor John Antaramian.
James was particularly frustrated that they weren't using the police body cameras that are currently being utilized around the country.
'Quite frankly, it's just f***ed up in our community,' James added.
City and law enforcement leaders in Kenosha unanimously endorsed the use of body cameras in 2017 as a way to increase police accountability and collect evidence at scenes of domestic violence, among other benefits. But since then, they have balked at the price tag, raised policy concerns and put off implementation.
The delays meant that officers who were on the scene of Sunday's shooting of Jacob Blake while responding to a domestic call were not equipped with technology that could give their perspective on an incident that has roiled the nation.
Posted by makarella at 10:20 PM