Obasanjo Reveals How Long He Wishes To Live Before Dying

Obasanjo was part of the dignitaries present at the first anniversary of the monarch held in Abeokuta on Tuesday. 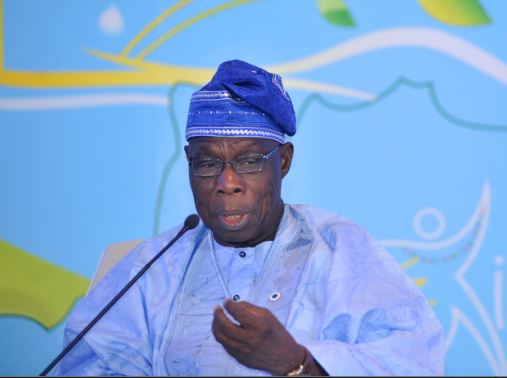 Olusegun Obasanjo, a former Nigerian president has said he wished to live beyond 100 so as to have more opportunities to celebrate with the Agura of Gbagura, Oba Sabur Bakare, Jamolu II, The PUNCH reports.

Obasanjo was part of the dignitaries present at the first anniversary of the monarch held in Abeokuta on Tuesday.

Oba Bakare received the staff of office from former Ogun State Governor, Ibikunle Amosun, on May 21, 2019, as the 9th Agura of Gbagura in Egbaland.

The monarch while commemorating his anniversary held interdenominational service with believers of all faiths and commissioned a borehole for the community.

Obasanjo, who clocked 83 this year, while speaking at the interdenominational service, said he wished to be at the 20th anniversary of the monarch.

He said, “I will be here to celebrate your 20 years anniversary with you whether I am invited or not.

“By the time I also partake in celebrating your 20th anniversary with you, if God wishes, He can call me to come and meet Him in heaven because I know by that time, I will be above 100 or more .”

The former president, however, advised the monarch to propagate unity among traditional rules in Yorubaland.

In his remarks, the Alake of Egbaland, Oba Adedotun Gbadebo, noted that the past one year of the reign of Oba Bakare had been characterised by direct engagement of Egba monarchs, leaders, and other stakeholders for social cohesion and unity of purpose.

Alake expressed that the entire Egba Traditional Council was satisfied with the all-inclusive leadership of the Agura monarch and congratulated him for a successful anniversary.

The Agura appreciated his guests, adding that the unity and love among the Egbas would continue to wax stronger.
Posted by makarella at 1:20 PM