Oh No! See What Fulani Herdsmen Did To OPC Member In Ondo

Suspected Fulani herdsmen have left an Oodua People’s Congress member in fighting for his life after an attack. 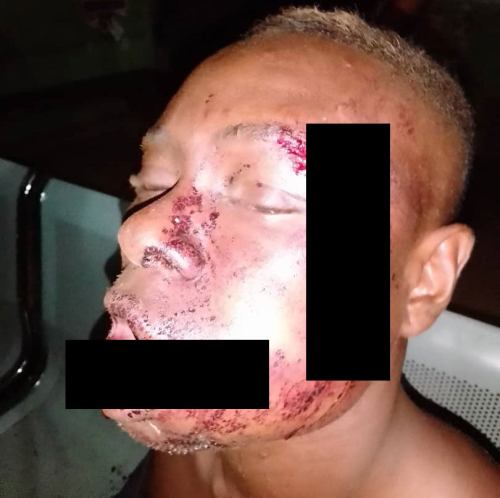 The OPC member attacked by Fulani Herdsmen
A member of Oodua People’s Congress (OPC), Sola Oguntade has been attacked by suspected Fulani herdsmen in Araromi area of Oba-Ile in Akure North area of Ondo State.
According to Vanguard, he was attacked at Owode/Araromi axis along airport road on last week Friday night while he was working with his motorcycle.
The victim is a commercial motorcyclist.
Speaking with newsmen in Akure, a member of OPC in Akure North, Mr Tosin Omotayo said Oguntade was flagged down by two Fulani men opposite area command office.
Omotayo said while Oguntade wanted to drop them at the Osi junction, he requested for their fares.

”As he stopped to drop the herdsmen, and requested for payment, three others came out from the bush and attacked him"
He said they shot him severally but when the bullet could not enter, they hit him with planks.
Omotayo said that his motorcycle and his proceeds for the day’s job were taken away by the attackers.
He added that the victim was discovered in the midnight on Saturday by some hunters who were on expedition.
The victim according to him was rushed to the state hospital by members of the OPC and the Police.
Contacted, the state police command spokesperson, Lee Teo lkoro said that the matter was yet to be reported to the state police command.
Posted by makarella at 11:17 AM