The Police have arrested kidnappers who held a girl hostage for 27 days and assaulted her severally over a N10M ransom. 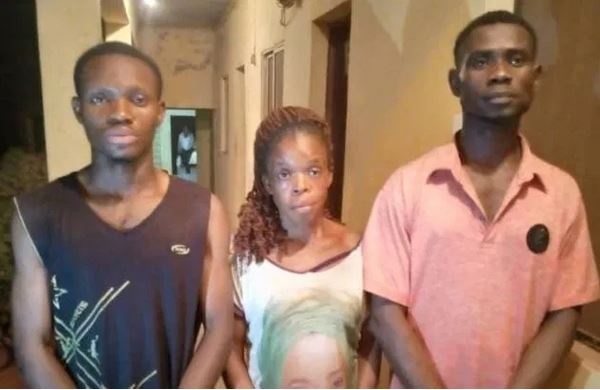 The Suspects
The Anambra State Police Command has nabbed a young kidnapping gang that raped a teenage victim over N10m ransom.


The teenager was reported to have been held in hostage for twenty-seven days and allegedly defiled severally by the suspects.

Relating the details of the operation that led to their arrest, the PPRO Anambra State Police Command, SP Haruna Mohammed said; “On the 8/2/2020 at about 5:30 pm, the Command Special Anti Robbery Squad (SARS) trailed and arrested at their hideout in Ogidi”.

“Suspects had on the 12/1/2020 allegedly kidnapped a 14-year-old girl in Onitsha and took her to an undisclosed location.

“Consequently, On the 30/1/2020 the syndicate contacted the victim’s mother through SMS and demanded a ransom of ten million Naira (N10,000,000) which was later reduced downward after much pleading by the mother.

“Suspects equally sent a first Bank account number 3120904371 bearing one John Blessing to the victim’s parent to deposit the ransom.”

Mohammed said the victim who was held hostage for twenty-seven (27) days and allegedly raped severally by the suspects was rescued by the Police and taken to the hospital for medical examination.

The case according to the PPRO is under investigation after which suspects would be charged to court for prosecution please.
Posted by makarella at 8:10 PM