The story has been told about revered Nigerian gospel singer, Yinka Ayefele who welcomed triplets after may years. 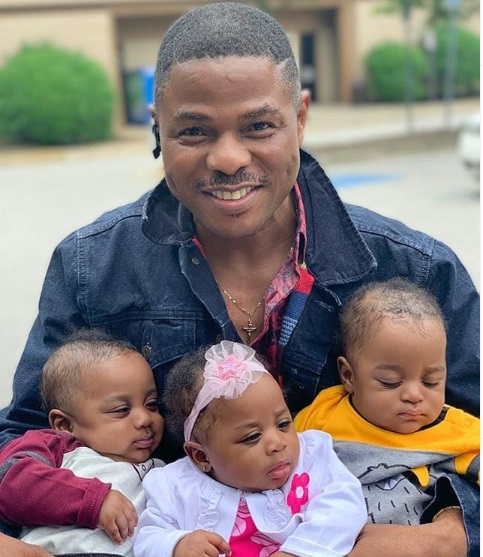 Ayefele and his triplets

Dateline is January 18, 2019. This date will forever remain momentous in the life of music and media mogul, Dr. Joel Yinka Ayefele. It was the day his bundles of joy, the triplets —Richard, Eniola and Raymond—came to this world at Holy Cross Hospital in Silver Spring, Maryland, United States. For over 20 years, the famous Tungba exponent battled a fertility challenge following a ghastly accident that has since confined him into a wheel chair after a spinal cord injury. With the belief by many that it cannot happen again, Ayefele never wavered as he believed in the spiritual power of God as well as modern science.


Spotlight gathered that for so many years, the founder of Fresh FM Radio Group alongside his beloved wife, Temitope, visited various hospitals in Nigeria, the United Kingdom and the United States meeting specialists for series of tests. They were told they are medically okay which spurred them to intensify efforts at procuring treatments including several IntraUterine Insemination (IUI) and In Vitro Fertilisation (IVF) operations which cost tens of millions backed with visits to various mountains across Nigeria for prayers. All failed until last year that they struck a right chord at a private hospital in Ibadan, Oyo State.
“Honestly, I couldn’t explain the feelings. On the day the result of the pregnancy test was confirmed to be positive, I nearly run mad. I couldn’t believe it can happen anymore after so many tests and treatments home and abroad. But on the night my wife finally put to bed those babies, it was an unexplainable moment for me,” said excited Ayefele who was hoping for a child but got three beautiful kids —two boys and a girl— as a great surprise. He however got many —both well wishers and talebearers— confused on the veracity of the good news. He initially denied the story of the arrival of those tiny tots until six months after. According to the music star, he was afraid of sharing the news at the time for fear of losing the babies after waiting for so long as the babies were born premature. So, he had to conceal the news until they were fully grown.

Of course, there have been wild gossips around the music mogul’s potency and rumours of him having two kids previously from another woman. This was given a fillip when he held lavish christening parties for the kids at his place in Ibadan a couple of years ago. However, it was learnt those two kids were actually those of his younger brother who stays with him. It was learnt that Ayefele had adopted those two kids as his own shouldering their responsibilities.
“Those kids remain my children till today. I have always seen them as my biological children because I have been using them as a point of contact with the belief that one day God will answer my own prayers and bless me with my own children too,” Ayefele told Spotlight. It was learnt that in the midst of his own fertility challenge, Ayefele has had to start a programme called “Fertility Community”, a group where other families in need of their own children were supported to go for various fertility treatment including IVF and they have recorded many successes including a family who had a quadruplet at a hospital in Ibadan.
However, to celebrate his triumph of faith, Ayefele is throwing a mega party for the triplets’ dedication tomorrow, Sunday November 3 in Ibadan. The elaborate ceremony starting with a thanksgiving service at the Christ Revival Miracle Centre in Molete area of the Oyo State capital will climax with a lavish reception at the Jogor Event Centre at Liberty Stadium Road also in Ibadan.
Excited Ayefele is said to be leaving no stone unturned to host the crème of Nigeria social establishment including state governors and magnates who have promised to turn up to celebrate God’s faithfulness in the life of the 51-year old Ekiti State-born gentleman.
***
Posted by makarella at 8:57 PM