A grieving man has told of how police officers allegedly horsewhipped and killed his wife in Lagos. 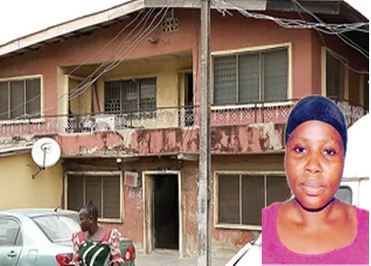 According to NewTelegraph, a Nigerian man, Sulaimon Okunola, has accused a mobile policeman, simply identified as Ibuka Steven, attached to Mopol 20, Oduduwa, Ikeja and policemen at Alapere Police Station of killing his wife, Aramide Okunola.


Aramide, a sickle cell patient, living in the same compound with the Stevens at Ketu area of Lagos State, was alleged to have horsewhipped the sick woman mercilessly for fighting his wife, Juliet and then dragged her to Alapere Police Station, where she was detained and disallowed to take her medicine. Aramide would later die, plunging her husband and three children into untold grief and agony.

Our correspondent gathered that Juliet and Aramide had a dispute over sweeping the compound and washing of the toilet on Tuesday last week. The quarrelled snowballed into a fight. In the course of fighting, Aramide bit Juliet’s lips. The injured woman would later go to hospital for treatment.

When Sulaimon heard about the fight, he rushed home to beg Juliet and also offset her medical bills.

But a fuming Steven was not happy with the fact that his Juliet was bitten. He was alleged to have returned home in a fury on November 23, stormed the Okunola’s apartment and dragged the sick woman out. He then started horsewhipping her in the presence of her three-year-old daughter, who earnestly cried and begged him to leave her mother alone.

According to the bereaved husband, “I thought that after taking Juliet to hospital, that the matter would have been settled. I never knew that Steven had other plans in mind.”

Sulaimon recounted: “It was after I left home that fateful Saturday that Steven and his wife went into our apartment to drag out my wife and started beating her. He used a horsewhip to flog her as if she was a child for daring to fight his wife. It was because of her health that my wife couldn’t protect herself.  While he was flogging my wife, some of our neighbours pleaded with him to allow her to be, but he refused. After satisfying himself, he then called policemen from Alapere Police Station to come and arrest my wife. When I got a phone call from our neighbours that my wife has been detained, I went there to secure her bail. When I got there the Investigation Police Officer (IPO) refused to grant her bail. She passed the night in the station.  I took food and drugs to her at the station; but the policemen there prevented her from taking them.”

Sulaimon recalled that he was preparing to go to the police station the next day, when one of the policemen called him.

He said: “The caller said that I should come quickly to the station with whatever amount I had to take my wife on bail. The way he sounded made me to sense that something was wrong.”

When Sulaimon got to the station, the IPO collected N3, 000 from him and asked him to quickly rush his wife to hospital.

He said: “We were heading to Gbagada General Hospital when I noticed that wife was unable to speak anymore. She was just crying; I encouraged her to exercise patient that everything would be all right. When we got to Oworoshonki, she died in my arms. I ordered the driver conveying us to the hospital to take us home.

“When we got home, my landlord prevented me from taking the corpse of my wife into my apartment before burial. It took the interventions of some elders in community before he allowed me.”
It was also gathered that immediately the mobile policeman and his wife got information that Aramide was dead, they immediately moved out of the compound.

Aramide’s elder sister, Adeola, who resides in Badagry area of the metropolis, said that when she heard that her sister and a co-tenant fought, she came to Alapere, sought out the Stevens, knelt down and pleaded with Juliet to forgive and forget.

Adeola said: “My younger sister and I begged the woman. I told them to take each other as sisters because they live in the same compound. Also, if they eventually leave that place, they should be able to greet each other when they meet on the road or anywhere. Juliet assured us that everything was all right. I was surprised when I received a phone call that my sister had been detained at a police station. I couldn’t go there because her husband told me not to come, that it was a minor issue and would be resolved.

“I was shocked when I received a phone called on Monday night that my sister was dead. What ran through my mind was that, it was because she was unable to take her drugs and the trauma the policeman put her through that caused her death.  Aramide was an easy going person. We have aged parents. I don’t know what to tell them now.”

One of the tenants, who spoke with our correspondent on condition of anonymity, said: “We have 15 rooms in the building. The only troublesome couple in the building is the mobile policeman and his wife.  Juliet believed that because her husband is a policeman, nobody can dare her. The issue of washing toilet,sweeping compound and bathroom always used to cause problem and it’s always from them.”

The neighbour continues: “The policeman and his wife always refuse to cooperate. They tell us they don’t have money to pay anyone we employed to clean the compound. We intended to employ the services of a cleaner to prevent constant quarrels. If we had employed such a person, probably Aramide would be alive today. Sincerely, she was easy going person. You only get to see outside when she’s taking her child to school or bringing her back. Even our landlord is not helping matter. He’s always taking side with the policeman. I don’t know why he does that.  We’re planning to move out of the house, as soon as my husband gathers enough money.”

The last born of the deceased’s parents, Mrs Rukayat Adekoya, said: “It’s unfortunate that my sister died in such a circumstance. On Friday when her husband called me that my sister fought with a tenant and that the person sustained injury, I had to call my elder sister who lives in Badagry to go there. Aramide and my elder sister begged the policeman’s wife, and the matter was settled or so we thought.  I was shocked when her husband later called me on Tuesday to say that she was dead. The policeman went into her room to drag her out and beat her with horsewhip as if she was a child. I’m calling on Nigerians and the Lagos State Commissioner of Police, Hakeem Odumosu, to fish out this killer policeman and those that denied her access to drugs at Alapere Police Station. I don’t want my sister to die in vain.”

The Lagos State Police Public Relations Officer (PPRO), a Deputy Superintendent of Police (DSP), Bala Elkana, while confirming the incident, insisted that it was a case of assault.

Elkana explained that on November 23, at about 12:40pm, Juliet Ibuka reported a matter at the Alapere Police Station that Aramide Okunola bit her lip due to a brawl between them and she sustained injury.

The image maker further said: “After that Mrs Okunola went ahead to pick a knife to pursue her round the compound. But she succeeded in using the knife to cut her door net. Both statements were taken at the station and she was detained behind bar and then later released. A witness, Augusta Samuel, a co-tenant was also at the station when their statements were taken by the IPO. On November 26,  Mr. Sulaimon Okunola, at about 1:30p.m, rushed to the station and informed the Divisional Police Officer (DPO) in charge of Alapere Police Station that his wife died at the Gbagada General Hospital.”

Elkana,  however, added: “The State Commissioner of Police, CP Hakeem Odumosu has directed that the case be transferred to the State Criminal Investigation and Intelligence Department (SCID), Panti, Yaba, for discreet investigation.”
Posted by makarella at 12:41 PM