He noted that the students were the ones at the receiving end, adding that by the time strike would be called off, lecturers would be paid and the government would continue their work too. 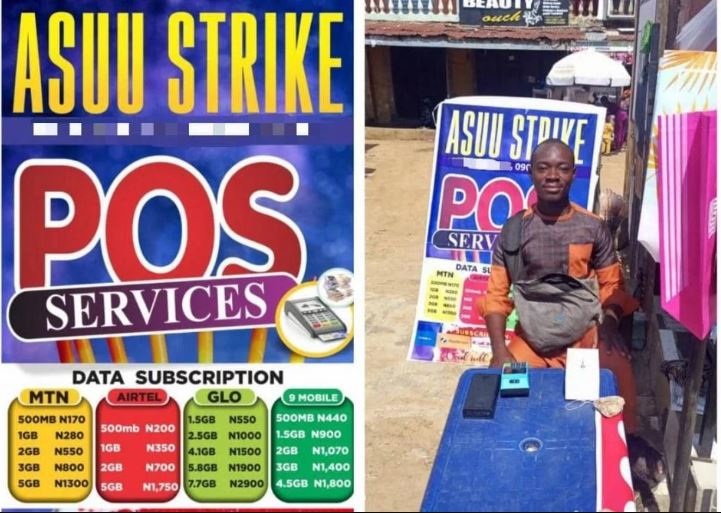 Usman Opeyemi, a 200-level student of the University of Ilorin, Kwara State, has begun a Point of Sale business, which he named ‘ASUU strike PoS’ amid the lingering strike action by the Academic Staff Union of Universities which has lasted seven months.

Opeyemi, a student of History and International Studies, who spoke in an interview with The PUNCH, Thursday, said he began the business when the strike action of ASUU appeared to have dashed hopes.

Sharing the picture of himself sitting at his shop, he had tweeted on Tuesday, “I don open business ooo, courtesy of ASUU strike.”

When asked what was the brain behind it, he said, “It’s just this strike; when you have your hope dashed, you have all your plans shattered. The inspiration just came that I should do something considering the kind of environment we are.”

When asked if the strike was traumatising for him, Opeyemi replied affirmatively, “Honestly! Because I initially applied for Law at the university, I wasn’t given, so I was of the opinion that let me quickly run this International Relations course and come back for law as a second degree.”

“But, with this strike now, that may not be possible considering the economic situation of the country. Some parts of our team have been shattered,” he told The PUNCH.

Opeyemi, who said he had been trying to fend for himself for a while now, added, “I left home since 2020, being on my own.”

He said the PoS business was thriving. “Yes, it actually pays. People are coming especially when they see the name. They’re wowed and say: ‘Oh that ASUU boy, let’s patronise him,” he said.

“I will advise that we should just make the best of the moment, utilise it well so we won’t lose at the end,” he urged other colleagues affected by the strike.

He noted that the students were the ones at the receiving end, adding that by the time strike would be called off, lecturers would be paid and government would continue their work too.

The PUNCH reports that ASUU began its strike February 14, with hopes still dashed on resumption for many students as both the Federal Government and the striking lecturers are yet to reach a consensus.