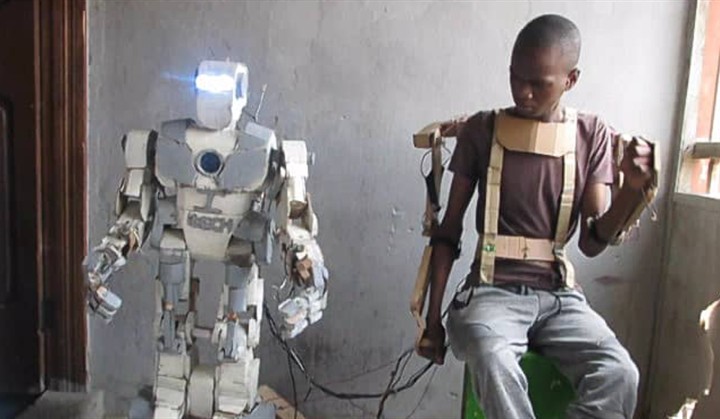 A teenage boy from Kano has built a robot.
The 17-year-old boy identified as Isah Auwal-Barde invented a robot that works with a robotic exoskeleton remote control, according to Peoples Gazette.
Exoskeleton remote control is a system of controlling a robot by the person operating it through demonstration with parts of his body.
Master Auwal-Barde on Saturday said he grew up with a passion for creativity.
He graduated from Government Secondary School (GSS), Sabuwar-Kofa, Kano, in 2021 and obtained seven credits in science subjects in the West African Examination Council (WAEC).
“It took me two years to invent the robot using local materials like DC motors, copper wires, pipes, corrugated cardboard as well as metal, among others, and the robot works with electricity. I want to be a robotics engineer so that I can be producing robots that can be used in addressing security challenges bedevilling the country,” said the teenager.
Master Auwal-Barde praised his father for supporting his project.
“Now, I want to get a scholarship to further my education abroad to fulfil my dream of becoming a robotics engineer,” he said.
The teenager further stated that his prowess in robotics engineering attracted a delegation from the National Centre for Artificial Intelligence and Robotics (NCAIR) to visit him.
According to him, the delegation promised to secure admission for him to one of the indigenous universities to study computer engineering.
“I have been giving him words of encouragement and telling him that he will become a robotics engineer in future,” said his father. “And whenever our electricity or electronics had faults, he was the one to repair them.”
By makarella - August 22, 2022