Nigerians In US Lambast Buhari Government Over Scarcity Of Passport Booklets

The concerned citizens who wrote to the Minister of Interior, Rauf Aregbesola, stated that Nigerians in diaspora had been facing difficulty in obtaining the country's green card. 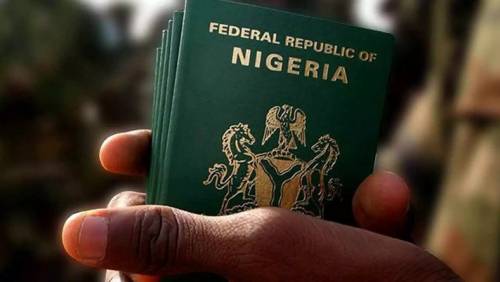 The many Nigerian citizens who live in New York in the United States, have expressed their dissatisfaction with the Nigerian government.

They scolded the President Muhammadu Buhari’s administration over the scarcity of passport booklets in the Nigerian Embassy.

The concerned citizens who wrote to the Minister of Interior, Rauf Aregbesola, stated that Nigerians in diaspora had been facing difficulty in obtaining the country's green card.

A copy of the letter, made available to the News Agency of Nigeria (NAN) in New York, stated the frustration by Nigerians applying for passports in its missions in the U.S. due to lack of passport booklets.

OAN had on June 29, held a virtual Town Hall meeting to discuss the challenges Nigerians faced in getting their passports and deliberated on ways to address the challenges.

In the letter, jointly signed by Mr Francis James, a board member of the Organisation for the Advancement of Nigerians (OAN, inc) and other leaders of 16 Nigerian associations, they expressed the frustration over what Nigerians went through to get their passports.

The letter reads: "This will enable the Consulate in New York to clear the backlogs at all processing locations and ensure that Passport processing from application to issuance is completed within a reasonable time frame of not more than three months.

“The ministry should expand the number of available appointments on the central portal to at least 100 each day, or to the number each Embassy or Consulate has the capacity to handle.”

The meeting agreed that a letter would be written to the Minister of Interior and other key relevant officials to communicate the three-point resolutions from the meeting.

“If this shortage of passport booklets should continue, we are afraid that the safety of the Consulate officials as well as the Nigeria House, New York and other Nigerian Missions in the United States may be in grave danger.

“The recent unwarranted aggression towards our fellow citizens working in our Consulates is not an aberration. It is the product of consistent Consulate’s inability to provide basic consular services to them.”

In addition, they condemned in strongest term, the needless suffering of Nigerians due to the constant shortage of passport booklets, adding that it was a basic service that any government could effortlessly deliver to her citizens.