The suspect repeatedly r*ped the minor and threatened to harm her if she tells anyone. 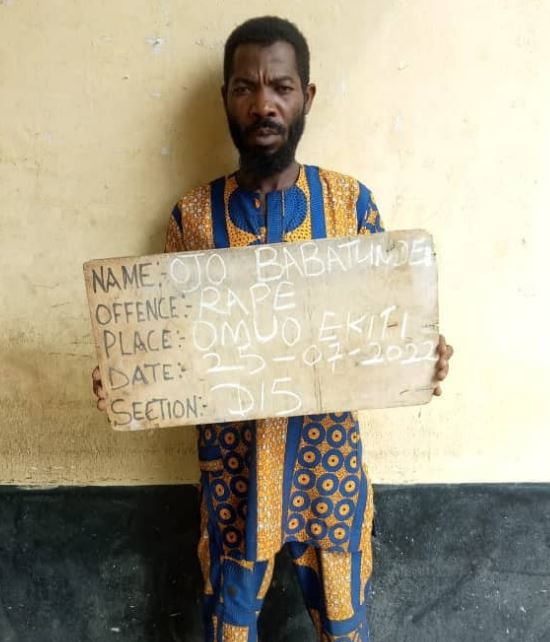 A man identified as Ojo Babatunde has been arrested by men of the Ekiti State Police Command for allegedly defiling and impregnating his 15-year-old step daughter.

Spokesperson of the command, DSP Abutu Sunday, who disclosed this in a statement on Wednesday, July 27, said the suspect was arrested by the juvenile Welfare Centre (JWC) of the State CID, in Omuo-Ekiti on Friday, July 22.

The suspect, of No15, Edugbe Street, Obadore, Omuo- Ekiti, repeatedly r*ped the minor and threatened to harm her if she tells anyone.

"The victim, who is already 4 months pregnant, claimed that the suspect, Ojo Babatunde, who is also her step Father, had unlawful carnal knowledge of her severally before and after she became pregnant," the statement read.

"She explained that the step father started r*ping her when the mother gave birth through Caesarean Section (CS) and had to spend about three(3) weeks in the hospital leaving her and the step father at home.

"According to her, the step father used to have unlawful carnal knowledge of her at home when her mother is away and often times lures her into the farm and defile her after which he will threaten her never to tell anyone or face the consequence.

"During interrogation, the suspect confessed to the commission of the crime and claimed it was the handwork of the devil. The suspect will be arraigned accordingly." the statement added.
By makarella - July 27, 2022