Niger Abduction: 11 students released by gunmen because they are too young and couldn’t walk 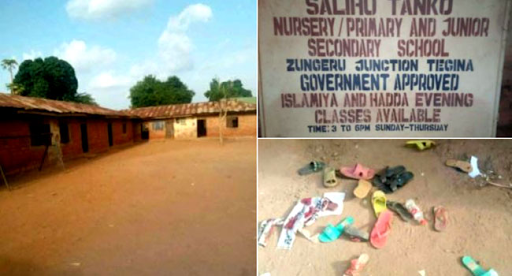 Eleven students who were part of scores kidnapped earlier from an Islamiyya school located at Tegina in Rafi Local Government Area of Niger State have been released.

This is according to a communique by Mary Noel-Berje, Chief Press Secretary to the state governor.

In the statement late on Sunday, Ms. Noel-Berje noted that the released children were deemed too small and couldn’t walk, and this prompted the kidnappers to release them.

The state’s chief scribe stated that Governor Abubakar Sani Bello expressed shock and is saddened by the recent reports of abduction of innocent people by armed bandits in several communities across three Local Government Areas of Rafi, Wushishi, and Bida.

Gunmen invaded Tegina community in Rafi Local Government Area, shot one person dead, and left one seriously injured as well as kidnapped an unconfirmed number of Islamiyya Students and Teachers from Salihu Tanko Islamic School alongside some passengers of a Sharon Bus travelling to Minna.

Speaking further regarding the ugly event, Governor Bello said it is outrageous that banditry in the state is escalating. He reiterated his emergency call on the Federal Government for prompt intervention.