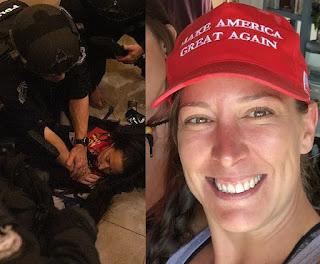 The woman who was fatally shot on Wednesday as Donald Trump's supporters stormed the U.S Capitol building and violently clashed with police has been identified.

The victim named, Ashli Babbitt, was a “strong supporter” of President Trump who had served in the United States Air Force.

“She was a strong supporter of President Trump,” the report added, saying the woman was from the San Diego area in southern California.

Washington, DC, Police Chief Robert Contee said the woman was shot by the US Capitol Police as the mob tried to break through a barricaded door in the Capitol where police were armed on the other side. She was hospitalized with a gunshot wound and later died.

TV channel Fox 5 reported Babbitt owned a business in San Diego with her husband, who did not come with her to Washington.

“I really don’t know why she decided to do this,” her mother-in-law reportedly told the station.

Babbitt identified herself as a veteran on her Twitter account. She had recently retweeted messages in support of Trump and from those coming to Washington for Wednesday’s rally.

“Nothing will stop us….they can try and try and try but the storm is here and it is descending upon DC in less than 24 hours….dark to light!”, she wrote in a tweet on Tuesday.