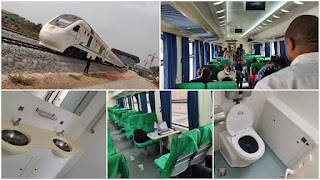 According to a man with the handle @dmIdavies, the train service is a comfortable one that goes for a relatively cheap price of N2500 - While many said the price needs to be made more affordable, others lauded the development as a good substitute to the overused road system Nigeria's transportation system could become a whole lot better with the speed rail that just launched, which takes people from Lagos to Ibadan with ease and without the fear of traffic associated with roads.

In a post on Tuesday, December 22, a man with the Twitter handle @dmIdavies gave a rider's experience, a review that should tell anyone what to expect with the rail service.

According to him and the snapshot of his ticket, a ride from the Yaba station in Lagos to Moniya in Ibadan cost a sum of N2,500. He said that the inside of the train is comfortable and very air-conditioned that one may ask for it to be reduced. There are also charging points for those who may want to work on their PC before they get to their workplaces. @dmIdavies said that while there are a whole lot of things that could be improved, the service is very good for the money.

He added that there is a stop between Lagos and Ibadan at Abeokuta train station, making the journey 2 hours, 30 minutes.

It was clean, comfortable, and well air conditioned (maybe too well cause it was almost freezing at a point)

There were charging points and it left exactly when it was scheduled to. 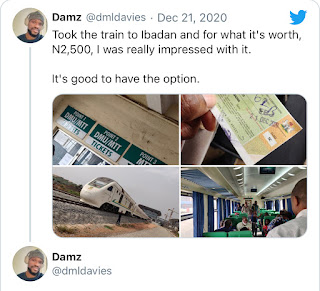 akinwale_keji said: "I stay at Elebu in ibadan, imagine me how much it will take me to get to Moniya. but no problem. now what will happen if i is coming to ojodu in Lagos??? I will have to spend hours from Yaba to my destination. I think shuttle to train stations needs to be looked into." @broda3000 replied: "It doesn't matter where the train stations are, they'll still be far from some people. If the train station was in your area, won't people at Moniya go thru the same issue?"

JoelJoe65684204 said: "I see people asking same question that has been answered several times . You are a very patient man oooooo. For #2,500 that is affordable. I bought a train ticket from London to manches for £90. 2hrs journey, although it's a return ticket .It could be lesser but depends on when."