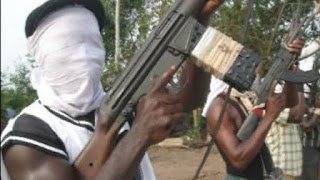 A man identified simply as Tega has been shot dead after some robbers attacked a PoS operator at Otovwodo community in Ughelli North Local Government of Delta State.

It was learnt that the robbers arrived at the PoS shop and attempted to rob its owner, but they were resisted. After shooting the PoS operator thrice with the bullets not "penetrating" him, the robbers shot Tega in the head and one other person in the leg while escaping.

An eyewitness told The Nation;

“They shot at the PoS operator thrice, but the bullets couldn’t penetrate him. As they were escaping, they shot Tega in the head and one other person in the leg.”

A senior police officer attached to the Ughelli Area Command confirmed the incident.