The suspects were arrested for abducting and slaughtering the victims for ritual purposes. 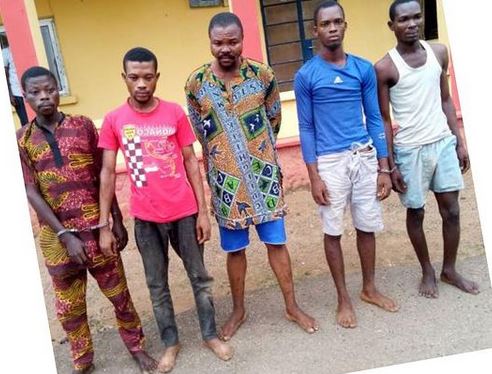 Five suspected land grabbers involved in the abduction and murder of a 45-year-old housewife identified as Memunat Akinde and a commercial motorcyclist, Ibikunle Ajose, in Idoleyin community in the Ado Ota area of the state have been arrested by the Ogun State Police.

Sahara Reporters report that the police also recovered the skull of Akinde, who had been abducted by the suspects and taken to an herbalist’s house for ritual purposes, before they were eventually slaughtered at a shrine.

According to the PPRO, Abimbola Oyeyemi, he said the duo went missing on October 1, 2020, when the woman contacted a motorcyclist to take her to the said market. But surprisingly, both of them never returned home since then which prompted her husband to lodge a complaint at the police station.

The police swung into action which led to the arrest of the suspects: Okediran Monsuru, Ajaoba Monday, Akewusola Wajud, Nupo Pona and Dasu Sunday (a herbalist). They confessed to have been working for a notorious land grabber, Lebo who is currently on the run.

The victims were abducted and slaughtered in an uncompleted building on the order of their principal, Lebo. The body parts were put in a sack and Dasu took it to his shrine for money-making ritual. The head of the woman was recovered from his shrine.
By ABEE - December 24, 2020