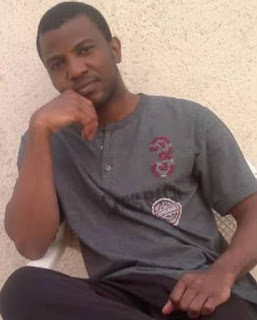 The family of a Nigerian man sentenced to death in Saudi Arabia has appealed for clemency and forgiveness for their son.

Suleimon Olufemi has been on death row in Saudi Arabia for 18 years. He went for a lesser hajj in Saudi Arabia in 2002 and was accused alongside others of being part of a mob action that killed a Police officer in the kingdom 18 years ago.

Mr Suliamon Olufemi, an Electrician, was born in Lagos on 20 April 1978 and embarked on Umrah to Saudi Arabia in 2002.

On arrival at the airport in Jeddah, Suliamon called his friend, who he was scheduled to stay with in Jeddah, but the phone number was not going through, so he went to a place called  Karantina where he met some Nigerians when he could not locate his friend.

Some days after Suliamon arrived in Saudi Arabia, he followed the Nigerians that offered him accommodation to a car wash in the Bab Sharif area of Jeddah, where many African nationals worked as car cleaners.

Unfortunately, that day, there was a mob action which resulted in the death of a police officer.

Authorities came to raid the location, and Suliamon Olufemi and 12 other Nigerian Nationals were among those arrested.

He was sentenced to death in May 2005 following a closed trial which took place in the absence of legal or consular representation or adequate interpretation and translation facilities.

The other men, who were initially sentenced to five and seven years imprisonment, were later commutted to prison terms and lashes.

However, Suleimon remains on death row.

According to Saudi Arabian law, the daughter of the late officer who was two years old at the time of the incident, and is now above 18, will determine if Suleimon should live or die.

The family of Suleimon  has pleaded for clemency for their son.

The 80-year-old father of Suleimon, Yavimaku Olufemi, and mother, Kikelomo, appealed to the Saudi authority to tamper justice with mercy and release their son while begging the Nigerian government to help them out as they are eager and prayerful that they will set eyes on their son before they die.

Suleimon's family visited the Nigerians in Diaspora Commission for help and was received by Hon. Abike Dabiri-Erewa, Chairman/CEO of NIDCOM. 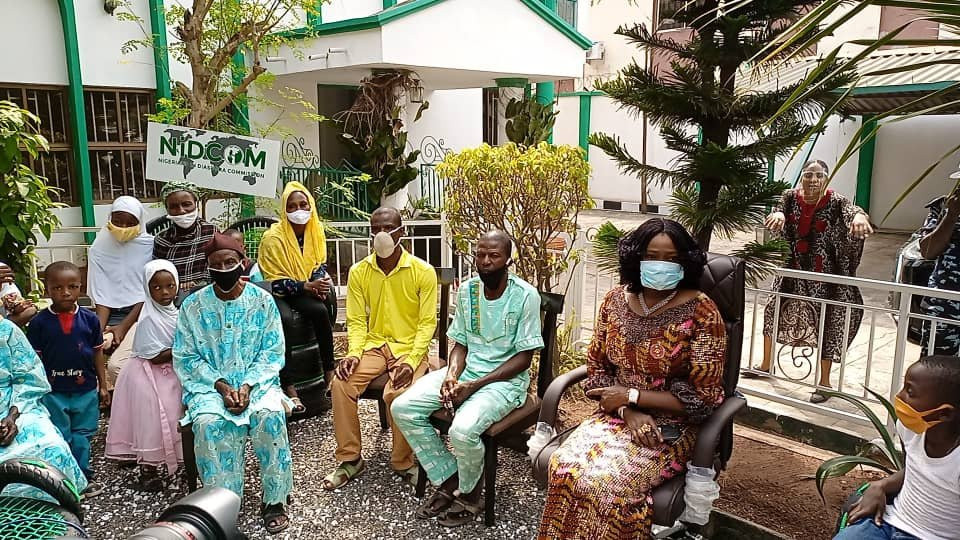 She described the incident as "unfortunate " and informed Suleimon's family that the "Ministry of Foreign Affairs, NIDCOM, the Nigerian Mission in Saudi  Arabia, some members of the Diaspora community in Saudi, Amnesty International as well as the House of Reps committee on Diaspora have all intervened in the matter."

Below is a statement released by NIDCOM after a meeting with Suleimon's family. 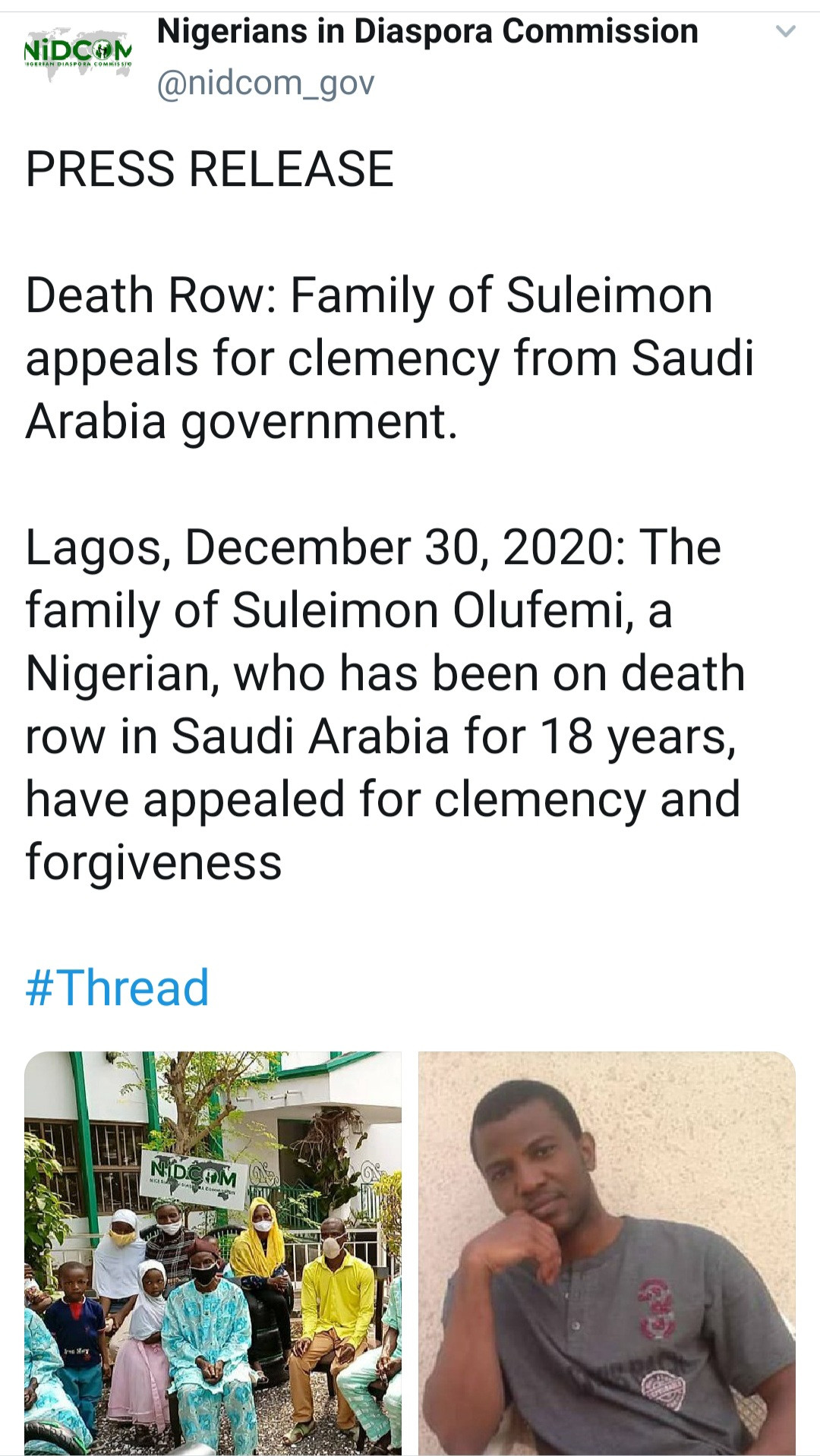 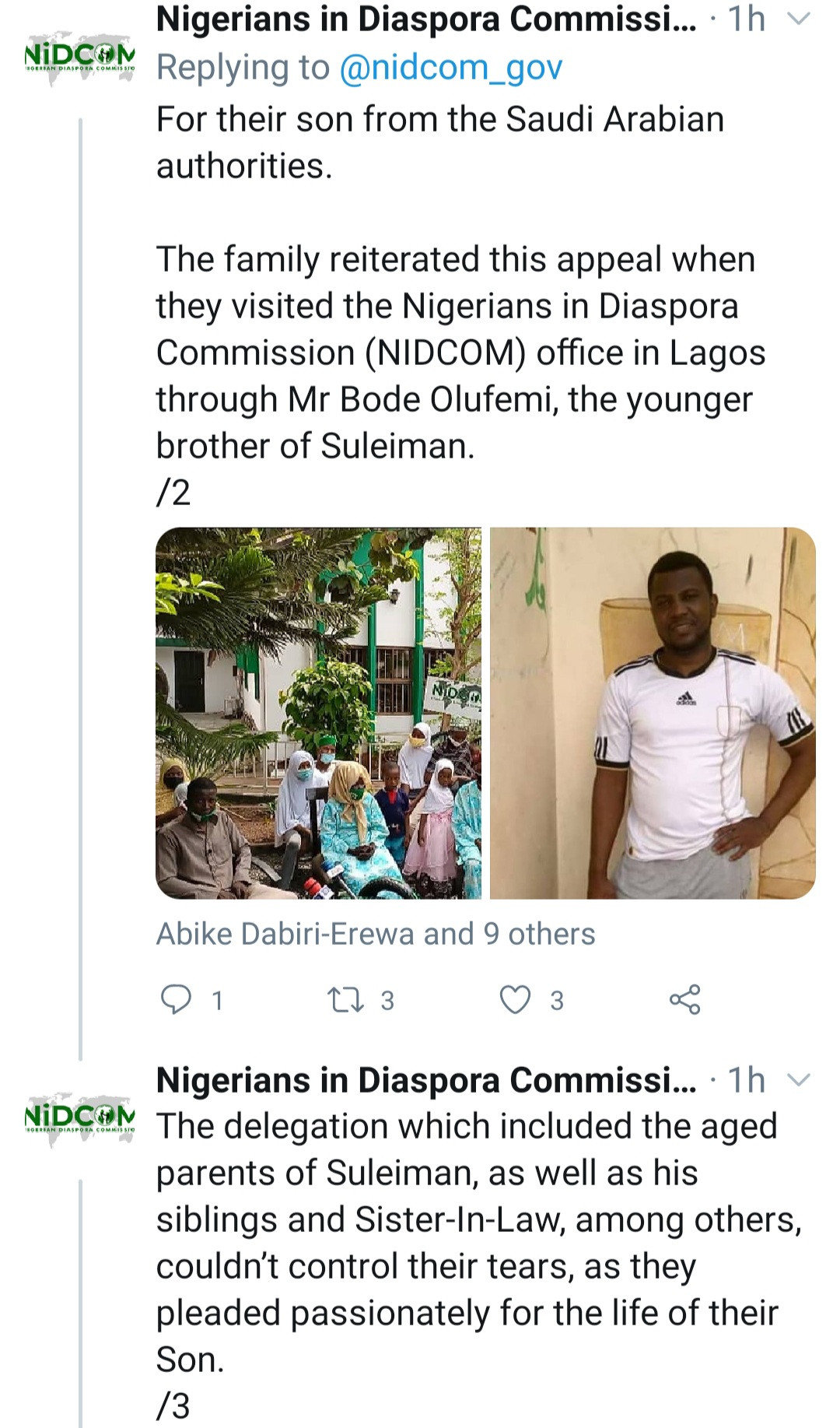 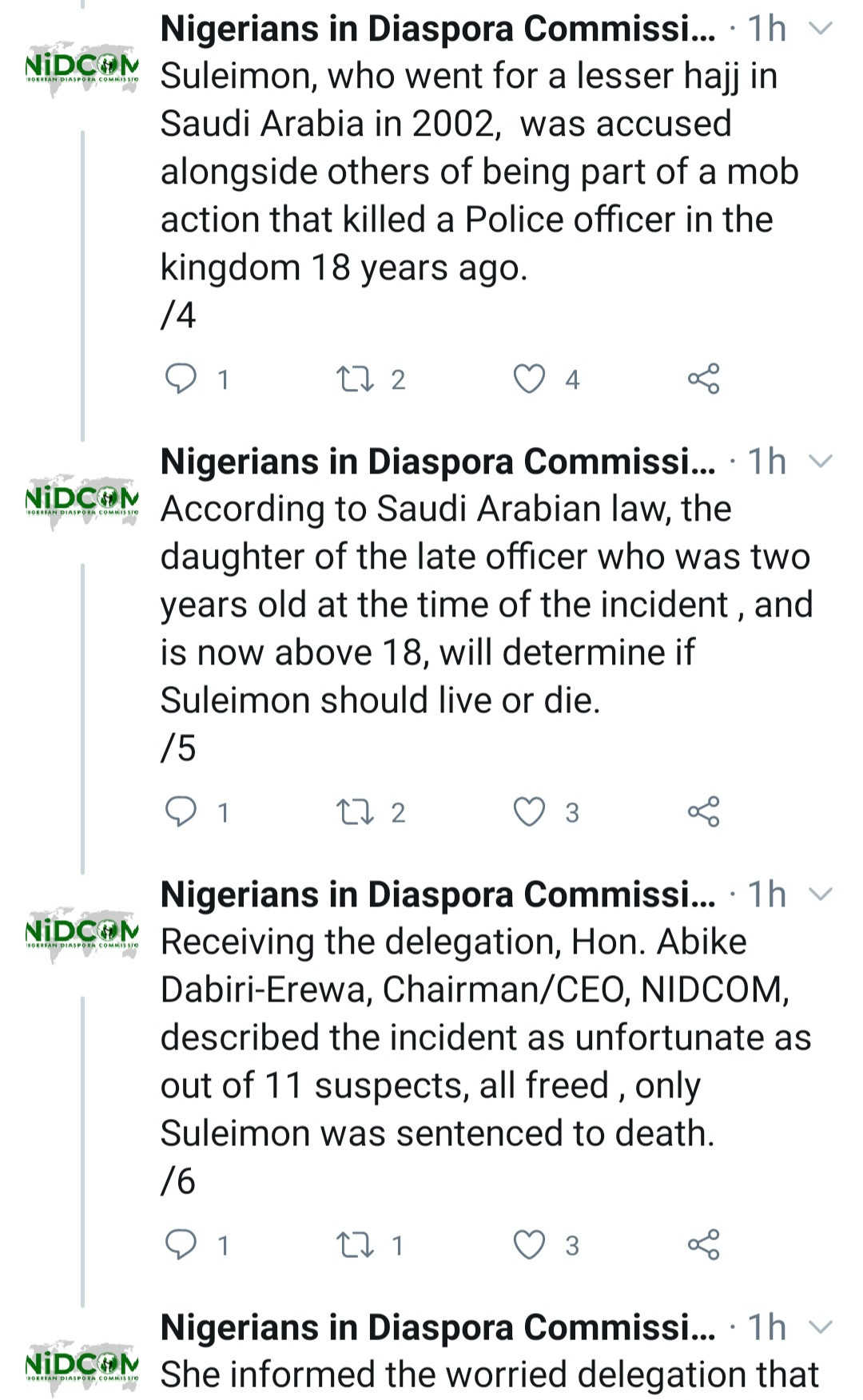 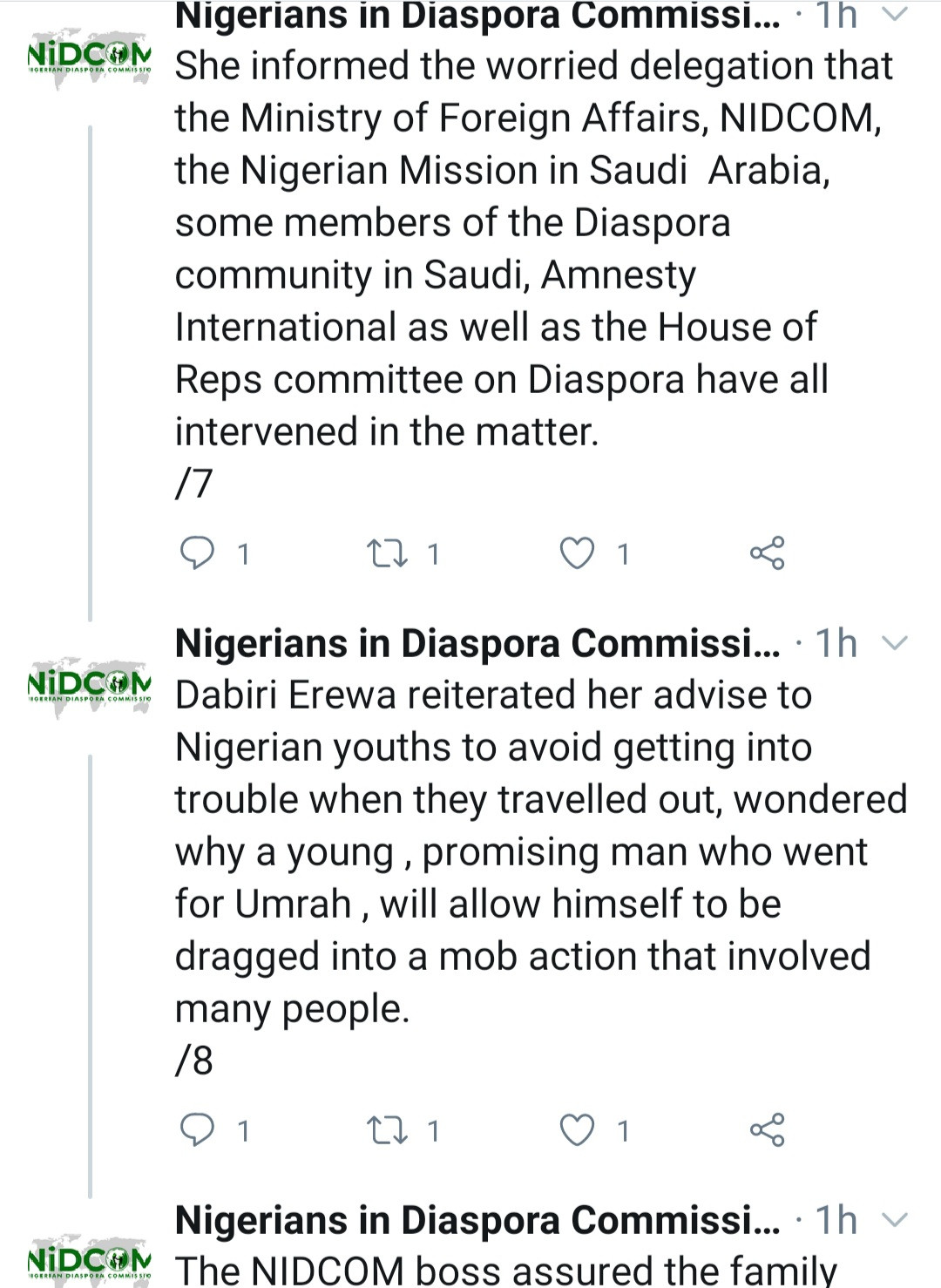 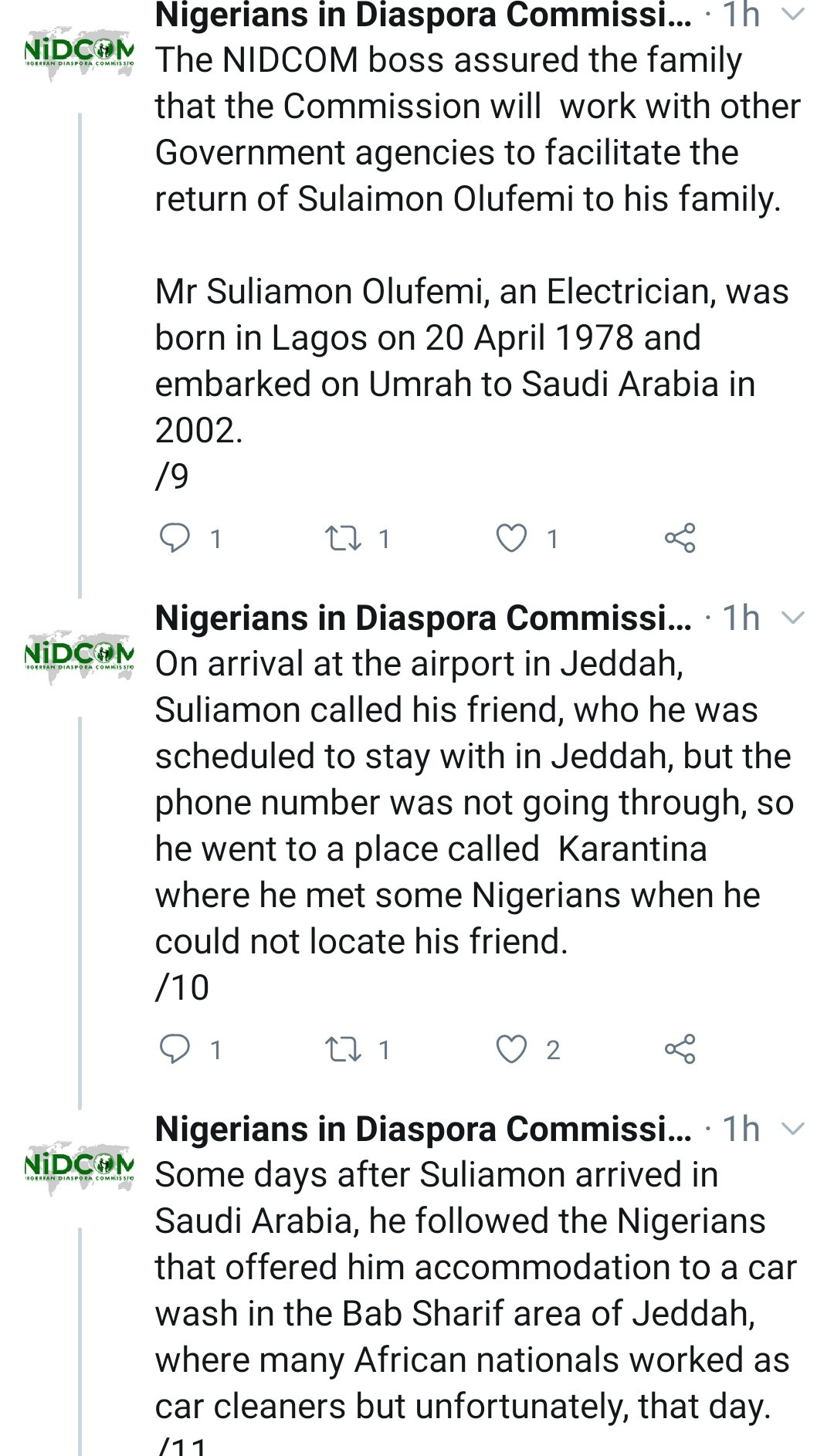 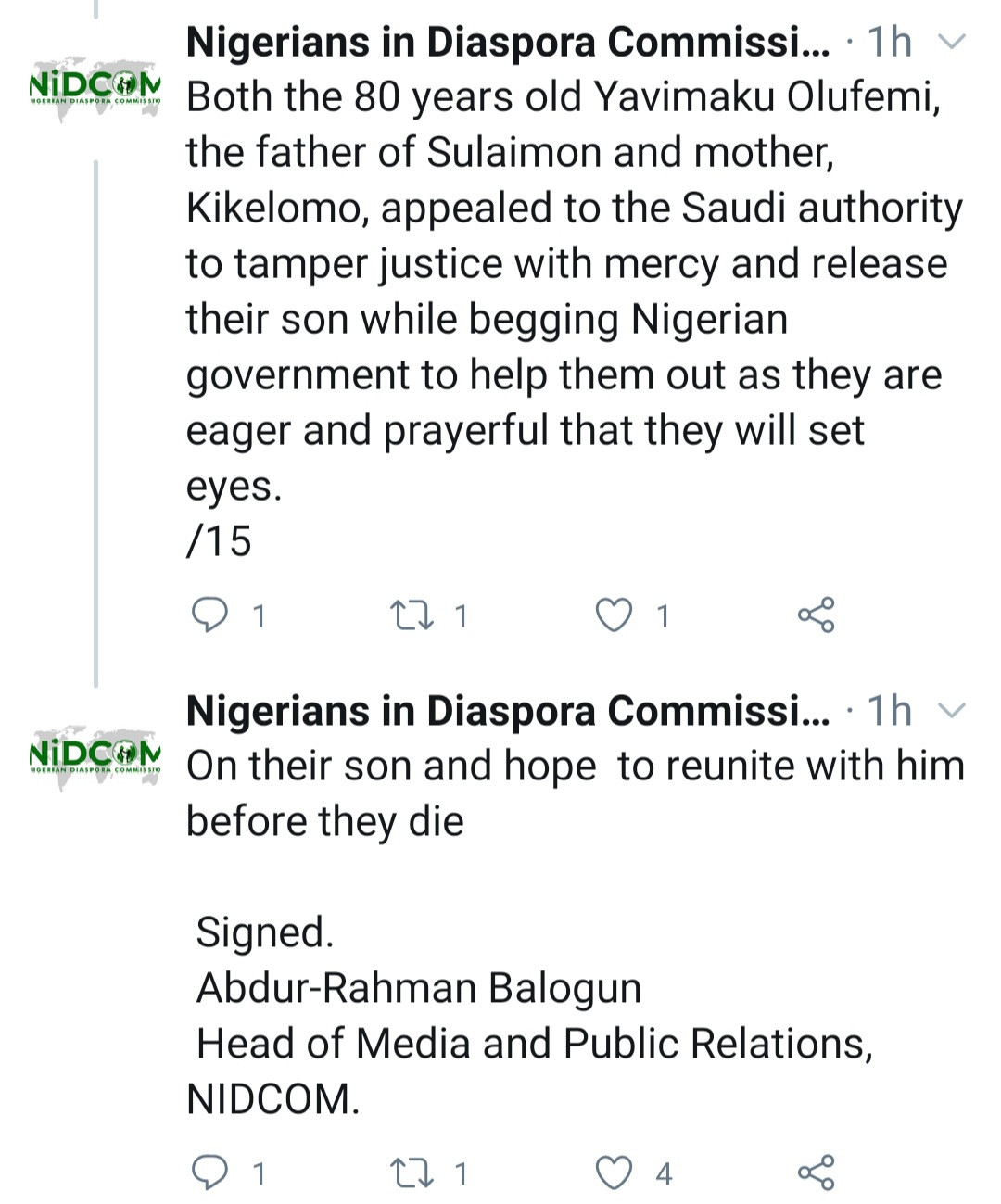