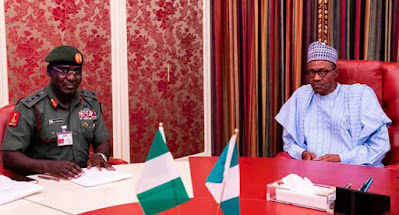 A request by the Chief of Army Staff (CoAS), Tukur Buratai, to deploy troops to end the ongoing #EndSARS protest has reportedly been rejected by President Muhammadu Buhari.

Buhari kicked against Buratai’s request noting that such action could backfire, the Peoples Gazette reports.

According to a presidency and two military sources, the president said heavily armed soldiers with a directive to open fire should be the last resort – if at all they’ll be considered.

It was gathered that Buratai who is furious that #EndSARS protesters have refused to stand down, asked for Buhari’s permission to deploy soldiers to disperse protesters and take over demonstration grounds in Lagos and Abuja.

“The president is wary of escalating the situation,” a military source said. “He does not want this to backfire because there are many locations that protests are holding across the country.”

Chief of staff Ibrahim Gambari was amongst those who advised the president against troops deployment.

National security adviser Babagana Monguno did not take part in the meeting but a source said he would be briefed.

A military source said Buhari and other top government officials are reluctant to take any action because they are yet to finger the those behind the protest.

“The president may still be asking for time to better understand the protesters first,” a military brass-hat told the Peoples Gazette. “But the president recognises that these categories of protesters are not the same as members of the Shiite sect.”

Recall that Nigerians have taken to the streets to protest extrajudicial killings and brutality by the now-disbanded Special Anti-Robbery Squad (SARS).

He also ordered former operatives of the disbanded SARS to submit themselves for psychological and medical examination at the Force HQ.

President Buhari had in a video on social media assured Nigerians that the reformation of the Police would be taken seriously by his administration.

Unsatisfied with Buhari and the IGP’s actions so far Nigerians on social media began another advocacy using #EndSWAT as a replacement for #EndSARS.

The protesters are now calling for the arrest, parade and prosecution of officers of the defunct SARS responsible for harassment and shooting of peaceful protesters.

International celebrities and personalities had added their voice to the call for an end to police brutality in Nigeria.

Posted by makarella at 4:16 PM