How A Truck Driver Narrowly Escaped Electrocution In Ogun

The driver reportedly escaped death by the whisker as he avoided stepping on any of the wires. 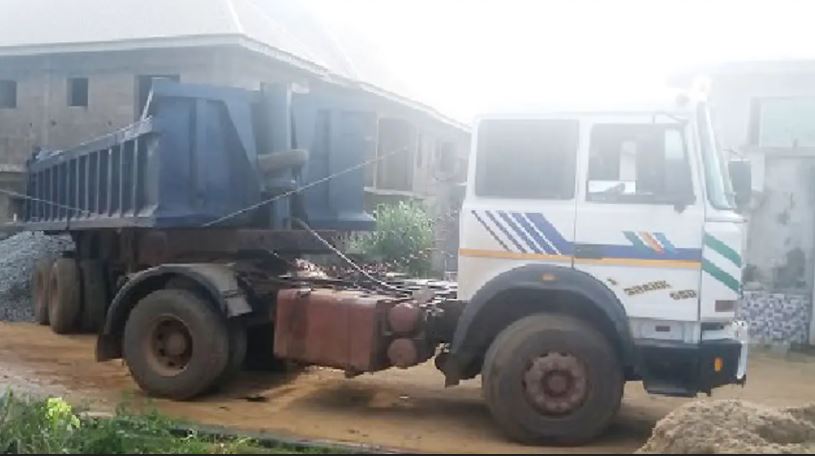 Photo credit: The PUNCH
A report by The PUNCH has shown that a truck driver, who identified himself only as Azeez, escaped electrocution on Monday after his vehicle, with number plate, Ogun LAR 700 YD, pulled down live electric cables.


The incident, which happened around 5.15pm on Monday along Association Avenue, Arigbede community, in the Ifo Local Government Area of Ogun State, caused momentary power outage.
The driver escaped death by the whisker as he avoided stepping on any of the wires.
Residents, who rushed out from their homes, were sent back by a group of men blocking the road to prevent any unsuspecting passerby from stepping on the live cables.
While two of the cables fell on the ground, the remaining one was firmly trapped between the body and edge of the IVECO truck’s cargo bed.
An eyewitness, who did not mention his name, said the driver jumped out of the truck immediately he heard people screaming that he had pulled down the cables.
He said, “The driver is still in shock and cannot talk now. You can see that two of the three cables are on the ground, while one is hooked to the truck. The driver was fast to leave the vehicle and was careful enough not to step on any of the cables.
“If he had stepped on any of them, he would have been dead. But we thank God he didn’t. One of the landlords in the area has called some officials of the Ikeja Electric to immediately disconnect power supply.”
The visibly shaken driver did not leave the scene until officials of the power distribution company came in, removed a fuse supplying power to the area and took care of the cables.
Power was restored about two hours later, as the Ikeja Electric officials fixed the problem.
Posted by makarella at 11:35 AM