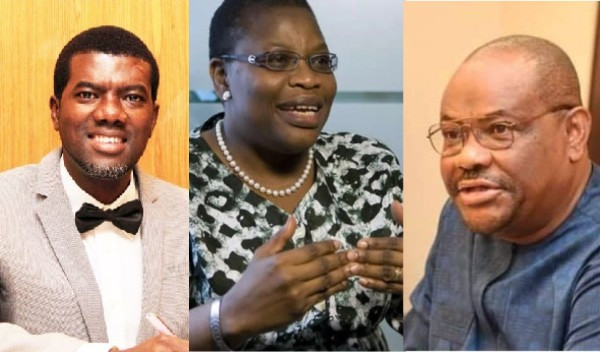 Former Presidential Spokesperson, Reno Omokri has slammed former Minister of Education Oby Ezekwesili for criticizing Governor Nyesom Wike over the demolition of hotel he claimed was opened for services in spite of a lockdown order he issued.

LIB reported earlier that Oby Ezekwesili who criticized the Rivers State Governor over the said act, averred that ''Power in the hands of persons without self-discipline in the absence of social accountability creates monsters in any society.''

However Reno Omokri countered Oby Ezekwesili in tweets he shared afterwards. He described the former minister as a "saboteur and house rat that tells the bush rat where to go". He also alleged that the BBOG convener "was silent when Yinke Ayefele's radio station was demolished and when Governor Nasir El-Rufai destroyed his political opponents' homes."

Ever the hypocrite,@ObyEzeks is attacking Gov Wike for demolishing houses in Rivers. How come she was quiet when @Elrufai  demolished houses of political opponents in Kaduna? Is it because Elrufai family have her ‘beggar with receipt’?
@ObyEzeks is an @OfficialAPCNg agent. They have her ‘beggar with receipt’. They use her to sabotage the opposition. Yinka Ayefele’s radio station was destroyed. She was mute. @Elrufai  destroyed homes of political opponents. She was quiet. But she attacks Wike!
@ObyEzeks is the house rat that tells the Bush rat where to go. A saboteur. @Elrufai, whose son insulted her as ‘beggar with receipt’, demolished homes of his multiple opponents, including a serving Senator, but beggar Oby said NOTHING 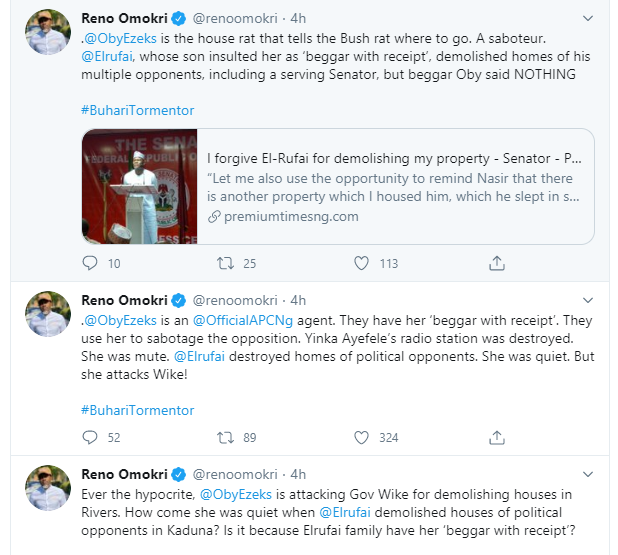 Posted by makarella at 5:31 PM