Rescued From Hell: The Pathetic Tales Of 54 Inmates Of Illegal Zamfara Rehabilitation Centre

The pathetic tales have been told about the 54 inmates of the illegal Zamfara rehabilitation center who were rescued. 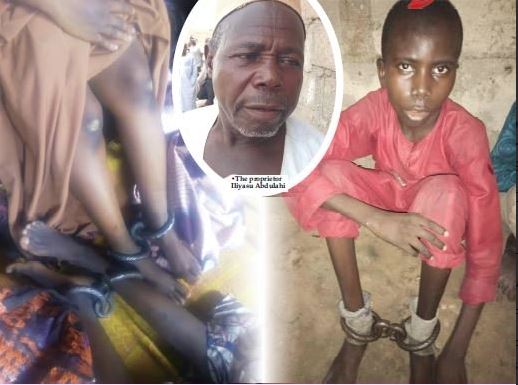 The victims
Their conditions were as awful as they were pathetic. Their skins were decorated with wounds from lashes and the heavy chains with which their hands and legs were shackled. Their foods were prepared in the most unhygienic conditions and should only be fit only for pigs. They are not only insipid; they are, in most cases, rotten.


Their inhuman conditions were compounded by the heat in the male ward, which made it difficult to breathe and exposed the hapless inmates to infectious diseases. It was clearly a scene depicting man’s inhumanity to fellow man.

Those were the conditions of the 54 male and female inmates of an illegal correctional centre in Gusau, Zamfara State, busted by security agents on Tuesday.

Zamfara State governor, Bello Mohammed Matawalle, had ordered a crackdown on the illegal ‘correctional centre’, which was effected on Tuesday afternoon. He had got wind of the existence of the centre and immediately ordered his Commissioner for Special Duties, Alhaji Mohammed Saddiq Maiturare, to lead a team of security operatives to the place.

Awwal Idris, an 11-year-old inmate, who said he was brought to the centre all the way from Kaduna State, explained that he was the one appointed to share food to the other detained pupils and also took part in preparing the foods.

Explaining why he was brought to the centre, Idris said he was in the habit of stealing petty things from neighbours and his parents got fed up with it. They told him that he would be travelling with a relative, only to find himself enrolled in the camp on arrival in Gusau.

Food, according most of the students at the centre, is always served late. Breakfast according to Farida, who was brought in from the Gusau metropolis, is served around 12 pm. She said they were being fed with “bad food” twice a day, despite a monthly payment of N17,500 by every inmate.
Posted by makarella at 3:11 PM