For attacking President Muhammadu Buhari, a northern group has called for the arrest of Nnamdi Kanu. 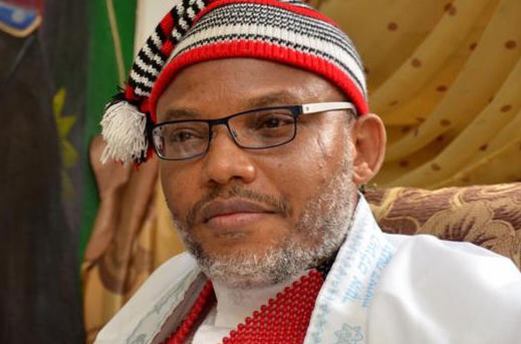 IPOB Leader, Nnamdi Kanu
The Arewa Youths Consultative Forum, AYCF has called for the arrest of Nnamdi Kanu, leader of the Indigenous People of Biafra, IPOB.
The group said Kanu should be arrested and made to undergo psychological tests.
AYCF President-General, Yerima Shettima made the call while condemning Kanu’s continued attacks and claims that President Muhammadu Buhari is fake.
Following Buhari’s broadcast ordering a lockdown to tackle the spread of Coronavirus, Kanu had claimed that the president used a body mask during the nationwide address.
The IPOB leader had on several occasions claimed that the Nigerian president was dead and replaced with one Jubril Al-Sudan.
However, Shettima in a chat with DAILY POST counselled the Nigerian government to apprehend Kanu using Interpol.
According to the AYCF President-General: “It’s been my position that Nnamdi Kanu should be checked psychologically, for us to be sure that he has no health problem. It’s necessary for the government of the day to arrest him.

“There is this Interpol arrangement that can be used to get him arrested wherever he is and brought back to the country where he should be made to undergo psychological tests.

“If he’s normal, then Kanu should be made to face the music at the Federal High Court but if he’s found to be psychologically abnormal, then he should be taken to a psychiatric home.

“The way he’s taking on the president and government using abusive words should not be encouraged. Mind you, if such character is allowed to go unpunished, our government both locally and internationally will be undermined by people who see him as a role model.

“Such madness must be checked, however, nobody is against anybody criticising the government but when you take on someone like the number one citizen of the country on a personal ground, then it gives us concern. Like him or not, Buhari remains the number one man.

“In as much as I don’t agree with so many things Buhari is doing, I can’t go out of my way to rain abuses and I think it’s high time we began to look at this issue and bring Kanu to order.”
Meanwhile, Kanu had lamented that Nigerians may die due to the lockdown.
Posted by makarella at 8:12 PM