Two men have reportedly disgraced themselves after they were seen fighting in public. 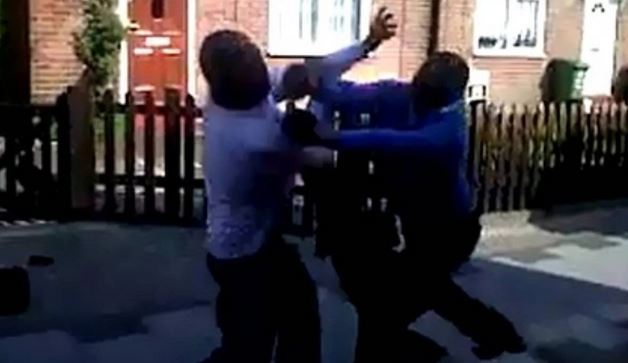 Fighting men (File photo)
Two married men obviously cheating with each other’s wives have allegedly fought outside a Mosque in Ijebu-Igbo.
The details of the incident was shared by a social media user, Olaseni Oladejo on his Twitter page.
He said the drama started after one of the married men found out his wife was cheating on him with another married man in mosque and decided to start a relationship with his wife too. After achieving his aim, he came to the mosque to announce it knowing quite well that the husband of the woman was present.
Well, things took a sad turn as the two men fought bitterly outside the mosque.
He shared:
"One time not too long ago in Ijebu-Igbo, one man married man had an affair with a married woman. When the husband of that woman got to know, he decided to also start an affair with the man’s wife too. After he achieved his aim, he went to mosque one morning.
They live on the same street too. That morning, he got access to the public address system during a time for “thanksgiving” during the prayers and started saying in Ijebu “so so person slept with my wife and I’m glad I have slept with his wife too.”
That man was also in mosque.
Turned to a full blown war between grown men. Nothing to learn, just me remembering that this world is a mess.
Posted by makarella at 9:30 PM