New Minimum Wage: What Ngige Said After Meeting With Labour

NLC said it was a notice in case the proposed negotiations slated for Oct. 15 with the Federal Government broke down. 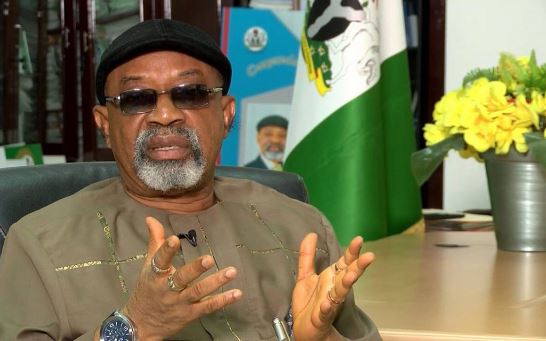 Minister of Labour and Employment, Dr Chris Ngige
Representatives of the Federal Government on Monday met with the leadership of organised labour over the implementation of the new N30,000 minimum wage.

The Minister of Labour and Employment, Dr Chris Ngige presided over the meeting.

Speaking after the meeting, Ngige announced that there would be another meeting on Tuesday with heads of government agencies and parastatals, where their books would be opened for scrutiny to see what amount can actually be paid to workers, Channels Tv reports.

“We met with the leadership of the organised labour movement on the implementation of the new N30,000 minimum wage and the consequential adjustment of salaries for civil servants.

“The meeting was an information-sharing from the previous meeting between the government and the labour leaders.

“We assured the union leaders that we would remain neutral in the whole negotiation and appealed to members of the union to show some understanding.”

DAILY POST recalls that the Nigeria Labour Congress (NLC) has directed its state councils to prepare for strike on Oct. 16 if negotiation breaks down again with Federal Government.

In a circular sent to state councils, signed by its General Secretary, Mr Emmanuel Ugboaja, NLC said it was a notice in case the proposed negotiations slated for Oct. 15 with the Federal Government broke down.
Posted by makarella at 8:56 PM