The Lagos residence of the NFF President, Amaju Pinnick has been reportedly sealed by the ICPC. 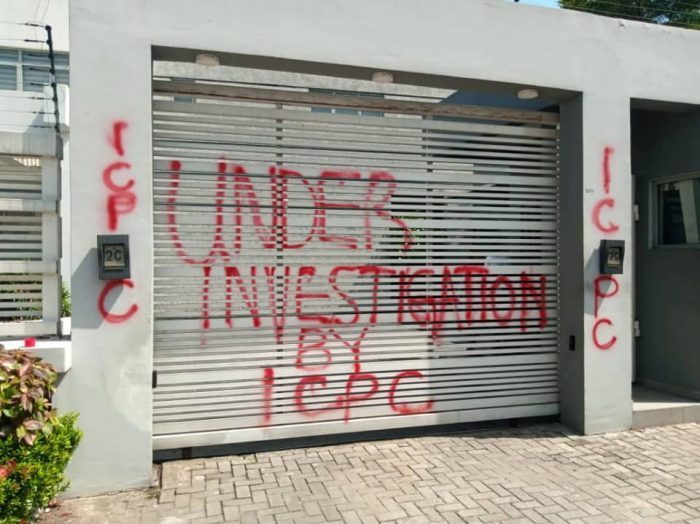 Photo credit: TheCable
According to TheCable, the Independent Corrupt Practices and Other Related Offences Commission (ICPC) has sealed off the Lagos residence of Amaju Pinnick, president of the Nigerian Football Federation (NFF).

TheCable understands that officials of the commission placed the house inside Parkview estate in Ikoyi, a highbrow area in Lagos, under lock, over corruption allegations levelled against Pinnick.

Earlier on Friday, the commission sealed off the Abuja residence of Shehu Dikko, second vice-president of the NFF.

Rasheedat Okoduwa, ICPC spokesperson, had told TheCable that Dikko’s residence was sealed because he and some NFF executives were under investigation.

A source told TheCable that some top NFF officials are currently on the run over fear of possible arrest.

The source added that the commission is investigating how the officials allegedly converted money meant for the federation to personal use.

Pinnick, Seyi Akinwunmi, first vice-president of NFF, Dikko, Mohammed Sanusi, secretary general of NFF and Yusuf Fresh, a board member, are expected to appear before a federal high court in Abuja on September 26, 2019, over diversion of FIFA grants reportedly running into billions of naira.

While denying corruption allegations levelled against the football body in the past, the officials have always said it is FIFA which reserves the right to probe the allegations.
Posted by makarella at 7:07 PM