The matter has been reported to the police while his body has been evacuated from the scene of the incident.Umar Yahaya, 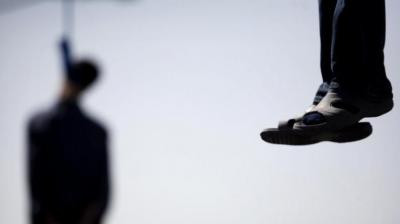 A father has been left devastated after the body of his son was found hanging in Abuja.
The yet-to-be-identified 11-year-old boy was found hanging in his family compound at the Federal Housing Estate, Kubwa, in Abuja over the weekend.
The father of the deceased, Umar Yahaya told DailyTrust that he and the mother of the deceased boy were not at home when the incident happened. It was their neighbours who found their son who is an SS2 student dangling from an overhead tank.
“I travelled out of Abuja, while the boy’s mother was at the City Centre, where she went to condole with a relative.
Our neighbours found him hanging around this overhead tank, and immediately rushed him to Kubwa General Hospital where he was pronounced dead by a doctor on duty” Yahaya said
According to neighbours, the boy had a misunderstanding with his elder sister for beating their younger sibling while their parents were away.
“He may have been annoyed by that, and thereafter tied his neck with a rope used for hanging clothes inside the compound. He was found dangling, with the rope around his neck” one of the neighbours said
The matter has been reported to the police while his body has been evacuated from the scene of the incident.
By makarella - August 22, 2022