In defiance of the Prohibition, hundreds of Mbaka's admirers thronged the Adoration ground in protest against the bishop's directive . 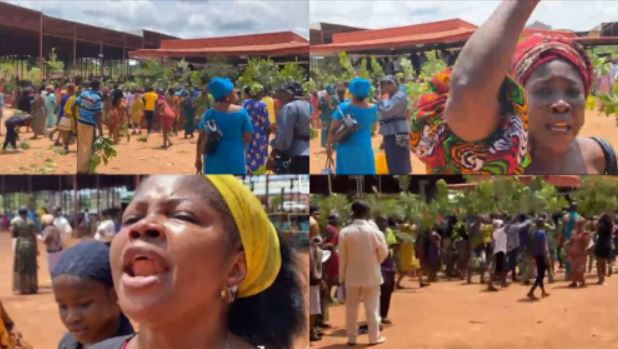 In what will come across as a really dramatic development, the many followers of the Spiritual Director, Adoration Ministry Enugu Nigeria (AMEN), Rev Father Ejike Mbaka, on Sunday defied a directive of the Catholic Bishop of Enugu Diocese, Most Rev Callistus Onaga, to stop attending Mbaka's church.

SaharaReporters earlier reported that Bishop Onaga on Saturday in a pastoral injunction on attendance to Catholic Adoration Ministry Chaplaincy Enugu, enjoined all Catholics to stop visiting the ministry till further notice.

It reported that the bishop advised the Catholic faithful to also pray for Mbaka.

Onaga had "in the light of the happenings in the Catholic Adoration Ministry Chaplaincy Enugu; capable of undermining the Catholic faith and teachings; and after several fraternal corrections and admonitions to Fr. Camillus Ejike Mbaka, the Chaplain of the Ministry; and after having given him pastoral directives and guidelines for the Ministry Chaplaincy, which he persistently violated; and in fulfilment of my pastoral duties as the Chief Shepherd with the obligation to promote and safeguard the Catholic faith and morals in Enugu Diocese, I hereby prohibit all Catholics (clergy, religious and lay faithful) henceforth from attending all religious and liturgical activities of the Catholic Adoration Ministry until the due canonical process initiated by the Diocese is concluded.

However, in defiance of the Prohibition, hundreds of Mbaka's admirers thronged the Adoration ground in protest against the bishop's directive.

Most of the followers who were with green leaves matched round the Adoration ground.

In a viral video, they could be heard calling for the removal of Bishop Onaga.

One of them said, "It is Bishop Onaga that should be suspended and not Fr Ejike Mbaka."

Meanwhile, a human rights organisation, Civil Rights Realisation and Advancement Network (CRRAN) has described the suspension order of the bishop as illegal and "a grave attack on the constitutional right of freedom of religion, worship and association."

A statement issued on Sunday by its President, Comrade Olu Omotayo, called on Enugu Catholic Diocese to retrace its steps from this dangerous incursion into politics and allow people to worship where they like.