Operatives of the Oyo State Police Command have arrested Ayobami Erinfolami, the suspected leader of the gang who recently attacked a popular radio station, Fresh FM 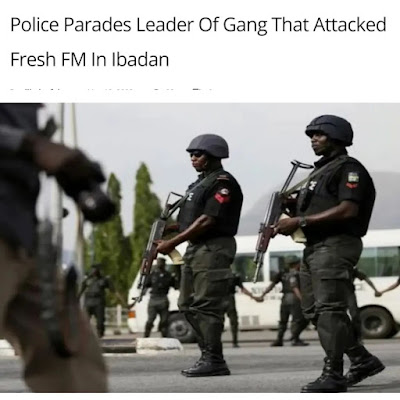 Operatives of the Oyo State Police Command have arrested Ayobami Erinfolami, the suspected leader of the gang who recently attacked a popular radio station, Fresh FM, in Challenge, Ibadan.

Speaking during the parade of the suspected armed robber and others arrested for various crimes at the police headquarters at Eleyele, Ibadan, on Tuesday, the state Commissioner of Police, Ngozi Onadeko, newly promoted to an Assistant Inspector General of Police, said that the suspects, who specialised in robbing hotels, hospitals and other public places, had attacked the radio station on April 10 and dispossessed employees on the duty of vast sums of money, expensive mobile phones and an FM Radio transmitter laptop at gunpoint.

Onadeko said the incident was reported at the Monitoring Unit of the command led by the Commander, CSP Olusola Aremu, and an investigation was launched to apprehend the perpetrators.

The police boss said gang members carried out a similar operation at different hotels within the Ibadan metropolis. In contrast, on March 24, the gang also stormed a hospital in the Ring Road area, where patients and medical workers were attacked and dispossessed of their values.

She said, however, following the discreet investigation by operatives of the Monitoring Unit, the gang’s kingpin was arrested in his hideout in connection with the crimes.

“Upon interrogation, the suspect confessed to the crime and series of other criminal activities he had masterminded with his syndicate members in different parts of Oyo State.

“Investigation is still ongoing to crack the criminal network and other members of the gang who are at large to recover the valuable items that were carted away”, – Onadeko added.

The police boss said all suspects arrested would be charged to court upon the conclusion of investigations.