It also banned pregnant students and nursing mothers from hostels and bringing babies to classrooms and hostels. 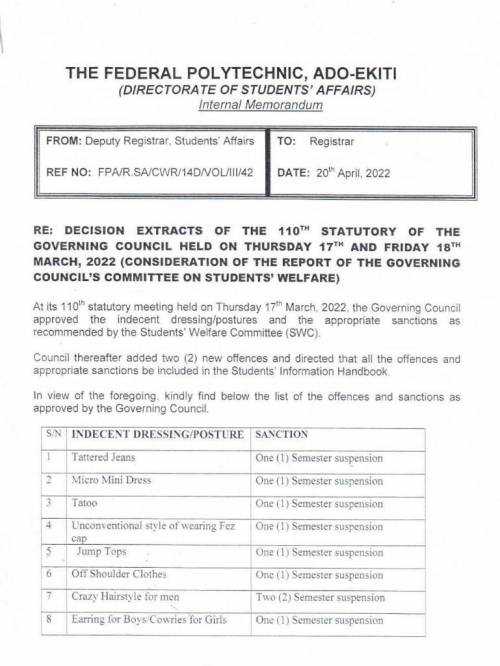 According to a report by SaharaReporters, the Federal Polytechnic, Ado-Ekiti, Ekiti State says any student who brings a car into the school will henceforth be suspended for one semester while the vehicle will also be impounded.

In an internal memo signed by the institution’s Deputy Registrar, Students’ Affairs, Mrs O.F. Ajayi, the school management also released sanctions for a wide range of fashion choices common amongst its students.

The school vowed to suspend students caught with coloured hair; tattered jeans; tattoos; nose, mouth, eye (extra) ring; intimate/open embrace (hugging) and ‘crazy’ hairstyles for men; earrings for men, cowries for women; among others, one semester or two semesters, depending on the offence.

It also banned pregnant students and nursing mothers from hostels and bringing babies to classrooms and hostels.

The polytechnic joins other Nigerian higher institutions such as Bayero University Kano (BUK), University of Ilorin, University of Lagos, Lagos State University and others that have in the past released dress codes for male and female students.