Fear In Ukraine As Russia Flies Nuclear Bombers Near Border

The Ukranian military intelligence comes after President Zelenskyy revealed he didn't trust the world when it came to preventing war crimes or nuclear conflict. 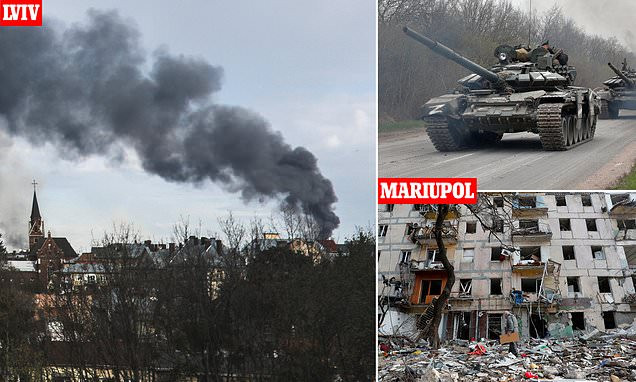 Ukraine has put its forces on the alert following reports that nuclear bombers belonging to Russia were spotted close to its border.
This comes following the sinking of Russia's warship in the Black Sea.
New footage shared by Ukrainian intelligence shows four Russian Tu-95s, known as Bears, flying in the Kaluga region, within striking distance of Ukraine on Monday, April 18, putting Ukraine on edge.
Moscow has previously used long-range bombers to strike Kyiv with non-nuclear cruise missiles but military analysts believe that Russian president Vladimir Putin may escalate his attacks on Ukraine after Ukrainian missiles reportedly destroyed his warship called Moskva.
The Black Sea missile cruiser was a huge part of Putin’s navy, and reportedly carried nuclear missiles before it was sunk.
The Ukranian military intelligence comes after President Zelenskyy revealed he didn't trust the world when it came to preventing war crimes or nuclear conflict.
The President said he can no longer believe reliability of “some countries or some leaders” following the invasion of his country by Russia.
Zelensky said when asked on CNN whether he finds the slogan “never again,” being used by most world leaders which is associated with Holocaust, now “hollow”, following alleged war crimes in Ukraine.
“I don’t believe the world. After we have seen what’s going on in Ukraine, we’ve — I mean that I don’t believe to this feeling that we should believe to the — to the — some countries or some leaders,” he said.
“We don’t believe the words. After the escalation of Russia, we don’t believe our neighbours. We don’t believe all of this,” he said.
By makarella - April 19, 2022