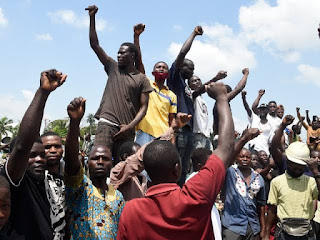 About 115 young Nigerians besieged the Ukrainian embassy in Abuja yesterday March 1, and offered to join the European country in its fight against Russian invasion.

Recall that Ukraine's President, Volodymyr Oleksandrovych Zelenskyy had accused the Russian army of killing civilians and also praised Ukrainians for having the courage to defend themselves. Zelensky called on anyone who wished to join in the fight against Russian invasion to come and fight side by side with Ukrainians.

Guardian reported that the men who besieged the Ukraine Embassy in Abuja, also put down their names in a register provided by the embassy.

Journalists were barred from taking their photographs, and the Second Secretary, Ukraine Embassy, Bohdan Soltys, confirmed the development, adding that no step had yet been taken to that effect.