The suspects alongside other gang members allegedly robbed the passengers with knives. 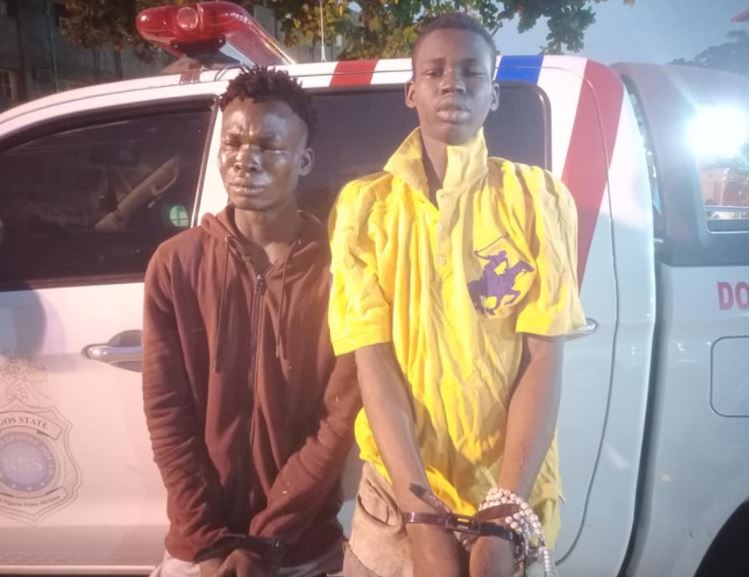 Two suspects have been arrested by the Lagos State Rapid Response Squad for robbing a Kano-bound 18 seater bus near Otedola Bridge after it had a flat tyre.

The robbers, Afolabi Ayomide (22) and Ezekiel Nwagu (21) were picked up in an uncompleted building very close to Otedola Bridge.The suspects in company of about eight others had robbed passengers aboard the Kano bound hummer bus when it had a flat tyre while heading towards Ojodu – Berger on Saturday.According to one of the passengers, who prefer to remain anonymous, the bus parked shortly after noticing it had a flat tyre near Otedola bridge. They were mid-way into replacing the tyre when they saw two young men came to check them around 11:00 p.m.

Shortly after that, they saw the two young men again with about eight others armed with knives. They robbed some of the passengers and left the scene.

The Decoy Team of RRS on getting wind of the incident, stormed the area and arrested two of the suspects who the passengers confirmed were members of the gang that attacked them.

Meanwhile, the Decoy Team over the weekend arrested 35 suspects in a raid of blackspots in Ojota, Ketu, Ikosi, Ojodu – Berger and some parts of Agege. The figure excludes those screened out after the arrest.

The raid, which was ordered by the Commander, Rapid Response Squad (RRS) started on Tuesday last week and proceeded into early Sunday morning.

The 35 suspects along with the two robbers have been charged to court.

CSP Olayinka Egbeyemi had, early Saturday morning, while screening some of the suspects directed the Decoy Team to sustain the raid until the level of crime in the State reduce.